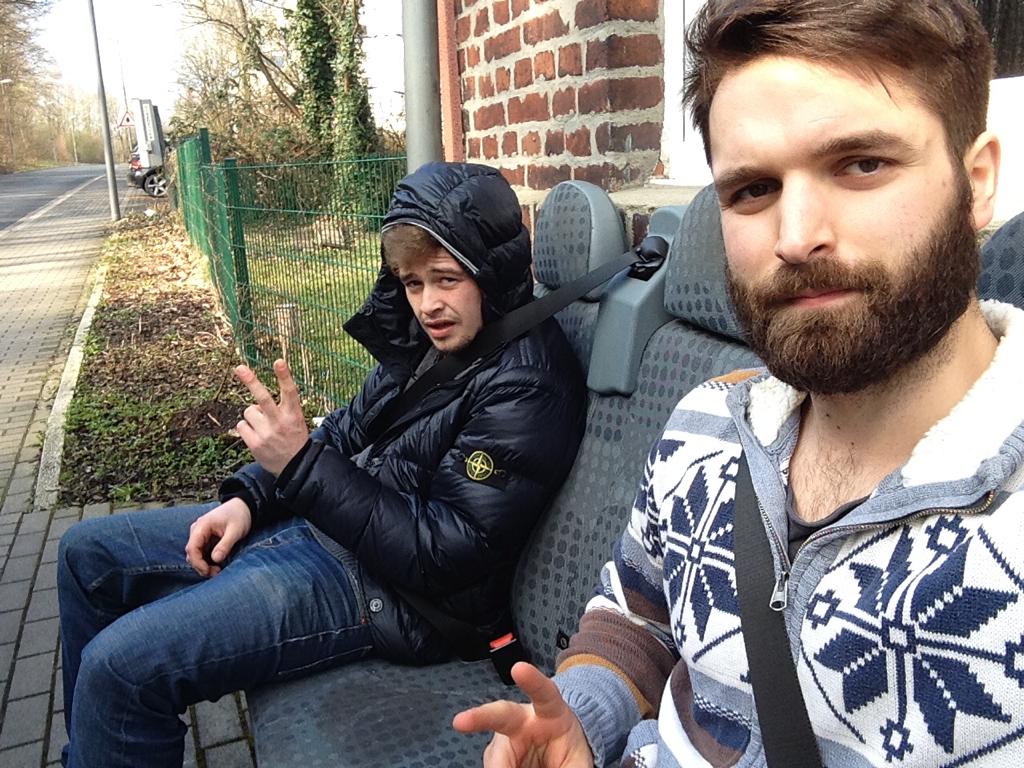 We meet each other 2015 at the SAE College in Bochum, both studying audio engineering, the first encounter was Christian playing this annoying Circle Game. You create a circle with your thumb and forefinger, I think you should know it. If there’s a tournament for this game, I bet he would win it definitely. We both have the same taste in electronic music, mostly we listen to Minimal and Tech-House. After some production sessions we used to hang around even more, we became pretty good friends.

You are one of the best up and coming EDM/Feel good duos we have encountered on the internet! And your latest track “Sometimes” is one of our all time favorite deep house tracks. How do you come up with your ideas? Also, what is your creative process like?

We had classical instrument lessons, so when we’re jamming around, we both understand each other when it comes to talking music and reading notes. Most of the time we are collecting/recording sounds, listening to other music, watching movies and talk about problems, 99 problems and they are all girls.

There’s also one habit Alban evolved during his process. He records the melodies with his iPhone, it sounds pretty embarrassing and those sounds should never see the world, but some of them turned into pretty good work and became the main melody on our releases on Spotify. But it all begins with Pizza when we meet, the first checkpoint is our favorite pizza place in Bochum at the Bermuda3eck. We talk about all and everything while enjoying our Pizzas. We are some kind of a small Sadboys Club. After hours of checking our favorite places out, we go into the creating process, we developed some kind of a mobile studio, so when we visit each other, we put all of our stuff together(MIDI Keyboards, Bass Guitar) and start working. Always start with a simple drum pattern and get creative with the percussions, after it we start the melody and record the bass after it. Some Synth layering here and there and then comes the painful part, create a great arrangement with even better transitions.

“One Ride” is another track which blew our mind! The mixing is on point and the melodies/ideas are out of this world! Could you tell us more about its creation process?

We all have things we keep hidden. Sometimes, keeping secrets is how you survive. If you listen with a producers ear you can clearly hear that we used every musical trick, you should use. Building tension in the beginning, give everything when it comes to the drop and then again, let them all free and catch them again. Music is a language, it’s hard to speak.

Alban produced the song mostly by himself, I know the beginning of it, especially the vocals were just so terrible until we processed them together.  In today’s music industry, you should live by the phrase “radio friendly/DJ friendly” sad but true and that’s how we create our songs.  One Ride especially is one and a half year old, but the process of producing a perfect song until it can be released is just the longest part. The beginning of One Ride starts within the first drop.  You have a synth plus a vocal layered together and in the second drop, you hear a real recorded trumpet only.

Simplicity is the key. Then we worked around it and get so annoyed with the arrangement, that we were like “f*** it, this will never work”.

So we produced other tracks and get distant to One Ride, we tried it once again and after hours of hard work… et voila, we created our best track ever.

Your signature sound reminds us of the sound of some of the greatest deep house artists In the world (Oliver heldens, Chocolate Puma, Sigala among others)! How did you manage to achieve such a professional sound in such a short time? Can you tell us more about your musical background?

You guys are crazy and overwhelming, we are far away from those artists, but love is love and we appreciate it. As I said it before, we both learned to play the piano, I went further and learned to play drums, while Alban got interested in playing bass and guitar. But the most time Alban has invested in Synth design and his synthgame is crazy.

He also takes care of the mix and mastering of our tracks.  Alban learned the main aspects Recording, Mixing and Mastering before he visited the SAE Institute Bochum.

He has this dumb but great ability to compare life with some old movies, his movie taste is awful. Everything he learned, he perfected at the SAE Institute Bochum. He comes up with the movie scene from “No Retreat, No Surrender”, where Bruce Lee appeared and does his thing with the Cups. Maybe he has seen some musicians ghost or whatever has come up to his mind, but he has come a long way till here where we are now.

You have only started putting up music on Soundcloud 8 months ago and you are already getting 10s of thousands of views! How does it feel to receive such a warm welcome from the community?

The love and especially the comments are insane! Some private messages are just so lovely and people asking for our opinion on their records. We uploaded and created tracks and DJ Sets even before we came up with our Alter-Ego “Yung ‘n Usls” (spoken: Young and Useless”).

Played at Techno Events under an old pseudonym, Alban produced and recorded Hiphop and House Songs for other people back to 2011 and 2014. Alban also managed to be the mixing engineer of a Bollywood Song that got released on Zeemusic Company while he still was a student.

Somehow we always have been “the dude who makes music”, living 100km apart and not knowing each other but after our paths crossed we have become good friends and a DJ/Producer Duo.  As every Artist, we wish it would be even more love, but the lord sends you only as much love as you can take, so I think everything is good and we hope there will be more Listeners turned into fans.

Our Goal is to create and release even more music, hopefully being booked for Club and Festival Gigs and make hundreds of thousands of people happy. Our biggest wish is that maybe someday other Artists remix and cover our songs, fans sing along to our music,  kissing their crush while listening to Yung ‘n Usls. I mean all that corny love stuff you do while being young and free.

Yes, three tracks are waiting in the wings just to be released and there is one Label offer that we are currently working out, but less talk and more action!