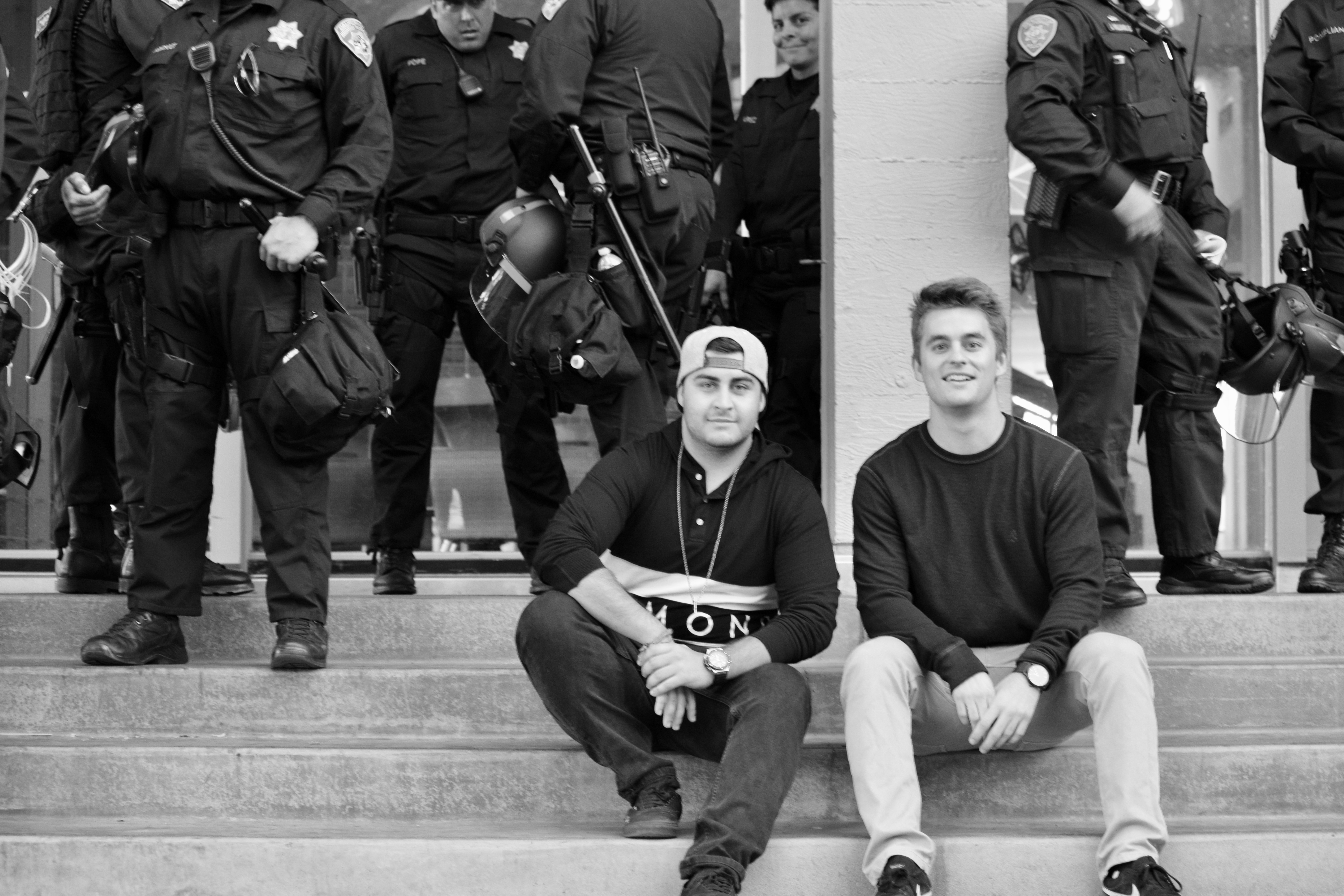 We first met while we were in college at UC Berkeley, and we pretty quickly became best friends who shared a love for music. However, at the time neither of us had any background in production, and Damon was DJing under the moniker NomaD. It wasn’t until Troy began producing a year or so later that he came up with the name waitwhat, inspired by an old college roommate’s drunken catchphrase (shout out to Trenten). What started as an anonymous joke in waitwhat began turning a bit more serious, just as NomaD began making appearances at clubs in San Francisco. The timing and chemistry seemed perfect, so we joined forces as waitwhat and it’s been unreal to see what we’ve been able to accomplish together in this short time!

You are one of the best up and coming EDM Dous we have encountered on the internet! And your latest remix of “Sugar we’re going down” is one of our all time favorites. How do you come up with your ideas? Also what is your creative process like?

Thank you so much! We really appreciate that and we’re glad you enjoyed the remix.

That track was a collaboration with our friend from Chicago, SEPPIE, which was a long time coming. We first started talking about working on a song together around November of 2017, and went through a few different ideas for original tracks and remixes before settling on “Sugar We’re Goin Down”. We feel super lucky that he even decided to work with us given how unknown we were, and it was an incredible learning experience to work with a gifted producer and audio engineer like SEPPIE.

In terms of coming up with ideas, there’s sort of two sides to the coin for us. One is very intentional, and that tends to relate to the composition – or melodies, chords, and the general rhythm – of a song. We have very little formal music theory background, so this really is basically humming out a melody or mentally beat-boxing a groove and translating that to the track. This is usually inspired by whatever sort of emotion we’re trying to invoke with the song. The other, and what tends to be a little more exciting when it works, is the experimental side of producing. This relates to the sound design itself, and for better or for worse we could spend hours processing a foley sample or creating a synth patch.

Memories with middle child is another great example of how capable you are as producers! The mixing is on point and the melodies/ideas are out of this world! Could you tell us more about the tracks creation process?

That song was super fun to work on, and has a similar background story to our “Sugar We’re Goin Down” remix. We were fans of Middle Child’s music and reached out in late 2017 or early 2018 asking to work together on a song, totally not expecting a response. Surprisingly he got back to us, and we tried working together on a couple of projects that never really took off. We continued to bounce some ideas off of each other until we landed on “Memories”, which he did an incredible job of laying the groundwork on. Really can’t overstate how talented of a producer Middle Child is.

In its early stages, “Memories” was really simple and mellow all the way through, which gives it an unmistakably chill vibe that we loved. It wasn’t until we had been working on the song for a few months that we decided to change direction a bit with that second drop going double-time. We wanted to take that sense of happiness and nostalgia and run with it, and given our California roots we tried to maintain the beachy feel. It felt like the perfect opportunity to raise the energy a bit with our first proper house hook and we think it all ties together nicely.

Your signature sound reminds us of the sound of some of the greatest future bass artists in the world (Flume, Slushii among others)! How did you manage to achieve such a professional sound in such a short time?  Can you tell us more about your musical background?

Thank you for that, it’s honestly crazy for us to be mentioned in the same breath as people like Flume and Slushii, who are both artists we look up to in the industry.

We both have pretty similar backgrounds in terms of formal musical training – we both did lessons in percussion for a few years as children and nothing else in a classroom setting. As mentioned, Damon has been DJing for many years which has been huge in terms of putting on professional quality live shows from the jump. But in regards to the production side of things, we’re really just embracing our nerdiness. It’s a combination of hours and hours of YouTube tutorials combined with picking apart and analyzing the minutiae of the songs we like. For example, Louis the child has a great lead progression in the chorus of “It’s Strange”, but that drop wouldn’t have half of the impact without the white noise bursts underneath that people tend to overlook. So constantly seeking knowledge mixed with tons of trial and error on our projects has gotten us where we are, and we still have plenty of progress we need to make!

You have only started putting up music on soundcloud 15 days ago and you are already getting tens of thousands in views! How does it feel to receive such a warm welcome from the community?

It’s been amazing to see people connecting with the music the way that they are; we love that we get to play some small role in these people’s lives. However it’s always in our heads that in the grand scheme of things, we’re still a very small duo with a lot of work ahead of us to get to the audience we hope to someday reach. We have lots and lots of room to grow, but we’re definitely happy with how far we’ve gotten at this point.

We have plenty of goals this year on both the DJing and production side of things. We hope to sneak onto a couple festival lineups for this summer, and we have some shows we’re excited to announce. We also have several originals tracks in the works that we can’t wait to share with everybody, and we’re working with some incredible producers and vocalists on them. I think what has us most excited about these next few releases is that we’re pushing our boundaries into different subgenres while staying true to our sound. 2019 is going to be a huge year!