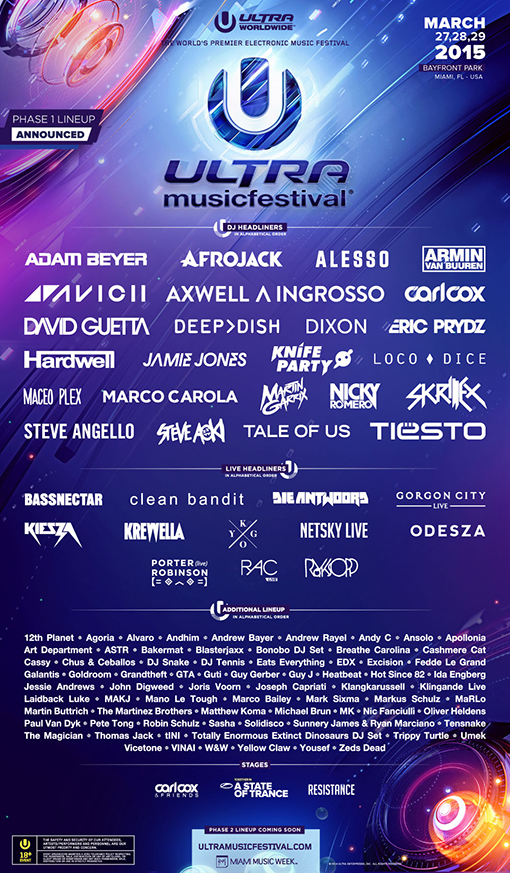 The January 7th leak announcing Ultra Music Festival’s Phase 1 lineup has bombarded social media, creating nearly unparalleled hype for the 2015 event. Given that we practically have the flyer memorized, we thought we’d share our notes with you.

This year’s headliners highlight the industry’s newfound interest in underground music, featuring house and techno artists like Jamie Jones and Loco Dice. Let’s be honest: 50% of those who attend Ultra are only there for the PLUR vibes, so it’s cool to see them follow the interests of the true EDM-lovers by selecting musicians who—while talented and respected—aren’t considered as “mainstream” as past choices. For those of you who identify as the PLUR-seekers and not the EDM-lovers, don’t fret—the rest of the lineup is as peppered with celebrity DJs as ever.

All this is fantastic, but here’s why you should be excited: all three members of the beloved group Swedish House Mafia will be in attendance. That is, Sebastian Ingrosso, Steve Angello, and Axwell. All in one place. All three. (Our sentences get progressively shorter as our emotions overwhelm us).

OK, we’ve recovered a little. Besides the big names, Ultra’s done a great job of curating its smaller acts this year, so we’re incredibly excited to review headliners and other performers alike. Don’t forget, the HBT Crew will be heading to Ultra Music Festival in Miami so all of you who won’t be making it this year can still fake knowing what’s up! We got you, boo.