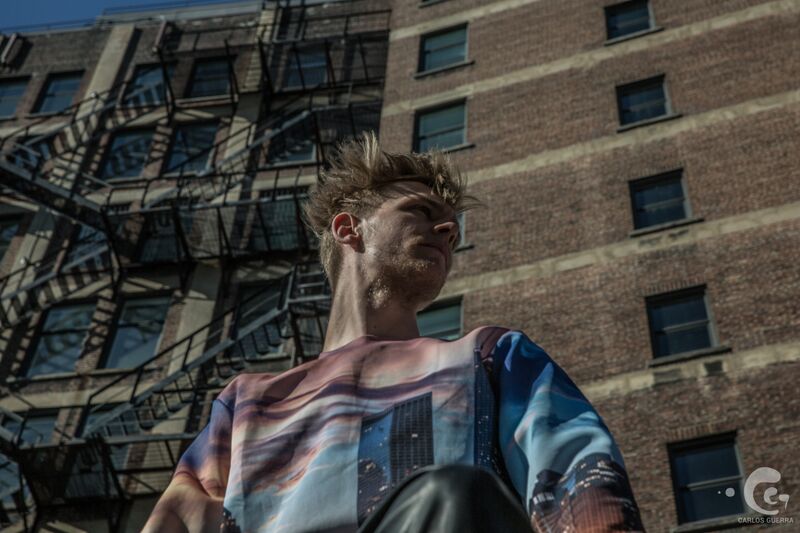 Living in Montreal is a blessing – especially if you’re into music. The scene is lively, vibrant, and constantly developing, with thousands of showcases and festivals providing the stage for mainstream and upcoming artists after dark. No matter who you are or where you’re from, a night in Montreal usually means discovering new talents, as a huge part of the night life involves shedding light on both local and global acts. It is in environments like these where talented independent artists meet, join forces, and work together to create something bigger than the sum of their separate counterparts – and therein lies the magic.

While the scene remains competitive, a musical man making recent headway has shown that all you really need to gain some recognition is to have a) multiple talents, b) a determined and positive outlook and c) a non-stop schedule of lined up events and projects to get yourself out there.

PSTV, formally known as Frédéric Hary, first began breaking ground in the local music scene when he took up dancing, specifically breakdancing, in his early adolescence. Coming from beginnings where dancing always played a large role in his life; he was naturally drawn to music genres like Hip-Hop, Rap and R&B. Though music remains a significant part of his life, breakdancing was not the final goal and his decision to quit eventually allowed him to focus his efforts on rapping and music production. In the end, it was producing that stuck.

In 2011, the young artist had his first gig with local Montreal acts, Truwayz and J-Torres at Divan Orange, a classic venue on Saint-Laurent Street, and has since created a local collective – Fourth Quarter – featuring fourth member, June Nawakii. The local producers play regular events in the heart of Montreal at The Secret Room (TSR) i.e. Ivy Night Club, and TRH-Bar, two venues on Saint-Laurent Street. Together, they mix Future Bass, Trap and House genres into unique and dynamic sets, with PSTV sampling old school R&B and soul artists like the Temptations and TLC in his mixes. He cites his inspirations as the Hip Hop of the 2000s and more recently, Mr. Carmack, Ryan Leslie, High Klassified, and Kaytranada, to name a few. Get to know more about Fourth Quarter on Facebook here.

As an individual DJ, PSTV has added several impressive gigs to his schedule, including regular nights at Newspeak on Rue Sainte Élisabeth, early morning rave jams at Morning Gloryville hosted at the Theatre St. James, as well as events at Belmont and the most recent addition to the TRAKNight family. Check out this awesome video from one of PSTV’s sets at Morning Gloryville to get a better idea of his signature style.

He has also participated in renowned local festivals like the Montreal Mural Festival, Artbeat Revelation and the Montreal MEG festival. PSTV also recently opened for FKJ and Dead Horse Beats and has played alongside artists like Robert Robert, RYAN Playground, Thomas White and many others.

While 2014 was an explosive year for the newly acclaimed producer, 2015 appears to be even more promising. Earlier this year, PSTV released his first video produced for another local artist, Monk.E, video available here. He also recently produced a video for the sultry and soulful up and coming Montreal duo, Heart Streets, which was released in June. The video is called Bubble of Joy, available here. In May, PSTV also released his first original track “Into Deep”, which received over 1,000 likes in the first 10 hours. To listen to PSTV’s first original track, click here.

PSTV’s ear for music has developed alongside his determination and enthusiasm for his refined career path of being a professional producer, rapidly solidifying his place in the local scene. In addition to his lively DJ sets and uniquely smooth sound, PSTV also radiates positivity through his social media posts, passing along not only his personal updates but those of his collaborators and the community – showing how music can and should be shared and always ending with the signature (+) sign.

With the recent buzz surrounding him, we highly suggest you follow his Facebook, keep up with his Soundcloud and try to catch one of his upcoming events to hear the latest in PSTV news – and of course, spread the PSTV!