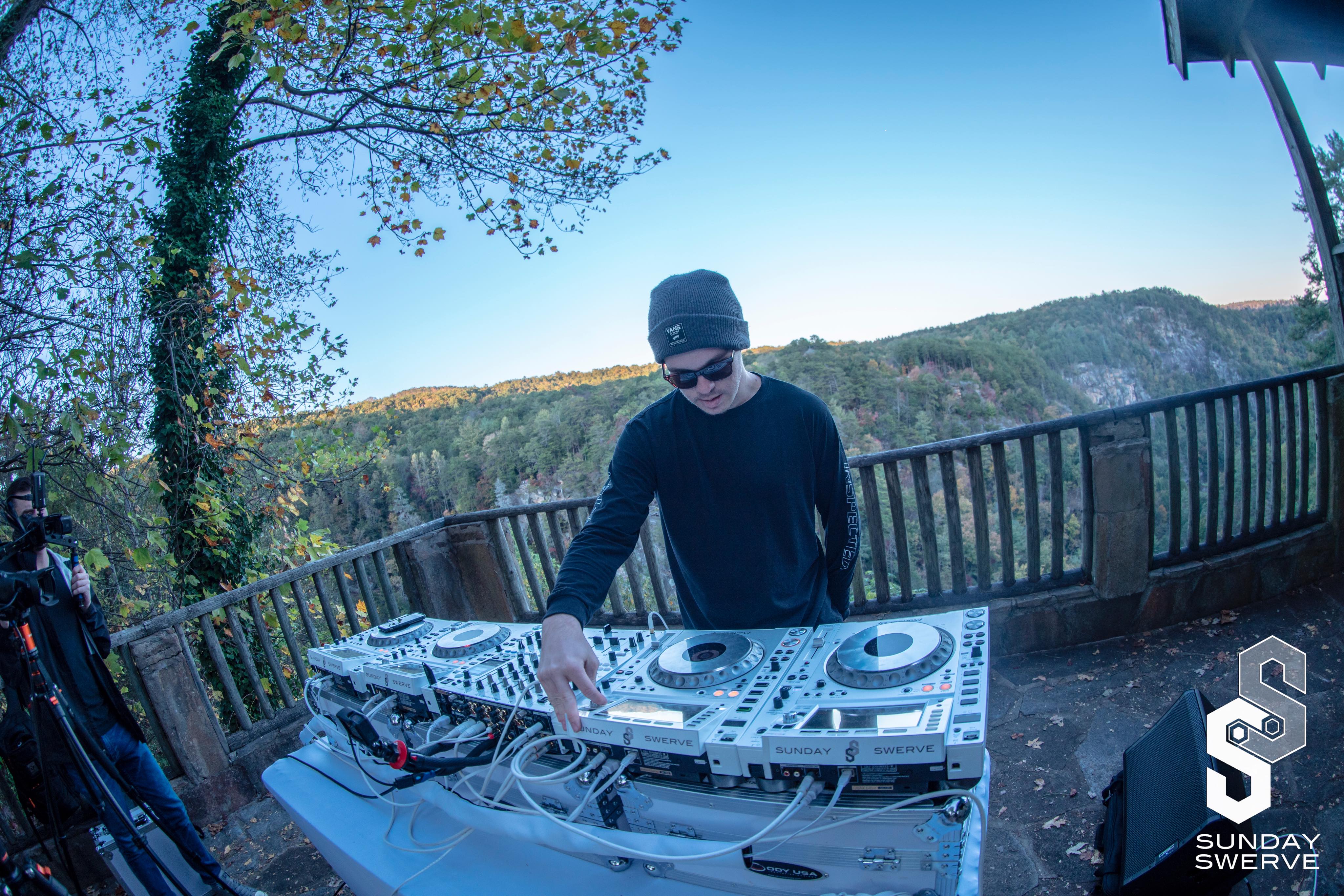 Oh man, that is a loaded question! It was definitely my parents when I was younger. I would always go through my parents cd’s and be so amazed at the artwork alone; taking out each album one by one and sprawling them across the floor. I can distinctly remember their double-disc “Queen: Greatest Hits” cd and being so amazed at the song “Another One Bites The Dust”. The bassline, the lyrics, the sound effects throughout, and the strong crack of thunder in the breakdown had my six year old brain throttled. From then on it was pretty much apart of my everyday life, with Rock being the genre that started it all. I progressed to heavier music like metal, hardcore, and even the pop punk/emo tunes we all loved in middle school. At the same time, I discovered hip hop; which took me down a rabbit hole. I became obsessed with artists like Mobb Deep, Mos Def, Gang Starr, Big L, and anything that had meaningful lyrics and a swingin’ beat. Pretty much if Dj Premiere or J Dilla produced it, I was all about it. That eventually transpired into more new age rap like Gucci Mane, Three 6 Mafia, Yo Gotti; the list can go forever. I didn’t care about the message so much as I did the beat behind it. Heavy 808’s, simple yet effective hi-hats, super catchy plucks, all of it; yet I still had no idea about bass music. One day I was at my friend Alec’s house and we were laying on his driveway smoking weed (sorry mom) and just enjoying a super nice spring day in Alabama. He decided to turn his speakers to us and proceeded to play “Tortured” by Coki. I was blown away. Sounds I’ve never heard, melodies that were unorthodox, and drum patterns that weren’t traditional; but it all came together in a majestic way. From then on I was sucked in and there was no turning back. I got a pirated version of FL Studio 9 and made shitty beats on my laptop for no better reason then to show my friends at high school house parties. However, I never thought past that. It was just fun. It’s STILL fun, more than ever now, but I never imagined it to take the path it has. As the years went on I became a bit more serious, made a soundcloud, and started djing little parties or just in my room. Eventually I graduated to Ableton and ever since then it’s been my greatest passion.

You are one of the best up and coming musicians we have encountered on the internet! And your track “The Gate” is probably your best track yet! Could you tell us more about the story behind this track?

First off, thank you very much; there is so much raw talent out there that I’m grateful to even be included in that category. I started “The Gate” a couple months back in my basement after working on this horrendous tune for the better part of a day. I became frustrated, went and made some coffee, and decided to call it a day on producing. However, something kept calling me back to my computer to ATTEMPT to start something decent (when I can’t “crack the code” on a song, it eats away at me with great fervor). I started digging for samples to strike some inspiration, found this cool line from 2Chainz on my laptop, then started getting some headway on a melody and worked pretty intensely on it until the sun rose. I sent it to Carl (Black Carl!) the next day to make sure it sounded ok, as I do with all my songs, and that was that. The tune itself sounds pretty aggressive/angry and it definitely is a direct correlation to me being so frustrated that I couldn’t pump out a song earlier in the day. I also put in a line from the movie “The Blair Witch Project” in the bridge because I watched it in between sessions and I thought it would add a creepy touch to it. I sat on it for a minute and just played it out live and really had no intention of releasing it until Sandy Finlayson (Seppa) inquired me about releasing a song through WONK#AY Records on their Halloween compilation, “Keep It Contagious”, and I instantly knew that “The Gate” would be a perfect fit. Honestly it’s become one of my favorite tunes to play out!

My studio set up is GARBAGE. All I have are two JBL 5” Monitors, an APC Mini Keyboard, and most importantly, my laptop. However, I have found that my lack of hardware has never really held me back. The first plugin I used was Massive, and it is still a staple in my production today. Any sound you could imagine can pretty much be made in it. The filtering you can achieve through it is essential to the sounds I crave to make. Accordingly, noise can sound extremely crisp with hardly any post processing (even though I do a good bit in the chain). Another favorite is the Ableton native plugin, Operator. Most of the crunchy, fm sounds I create are formed from there. It is great for achieving low-end frequencies while also attaining any kind of high-end sound you may seek. Serum is something I just got into but I am starting to like it more and more. Outside of that, I absolutely adore sampling whether it be vocals, a song made a century ago, or random funny clips I find online.

Tutorials, tutorials, tutorials. I can not read sheet music, I am not musically inclined, but I do have a sense of what sounds good (as does everyone). With that being said, I knew I had to gain some knowledge. I began watching hours upon hours of youtube tutorials before I worked a single day in Ableton. I thought that if I knew how to navigate the program and knew all the shortcuts, my life would be a lot easier; and it was (I highly suggest watching Mr Bill’s tutorials). From then on I guess I just started making beats I liked, which led to melodies I liked, and so on. It is kind of hard to have the mindset of “this is going to be my sound” because you kind of grow into it with every song you create. AND DON’T BE AFRAID TO MAKE TRASH SONGS! Any time spent in your DAW is time worth spent; you are learning, growing, and becoming more efficient at your craft. I have countless hours of bullshit beats. The possibilities are endless so I strongly encourage anyone just starting out to listen when I tell you that there are no set rules to this and your signature sound can come from the most obscure of ways. I think mine is far from professional but I try to practice as much as I can. I believe that my sound was created from a combination of all of my influences previously stated in Q1.

My mantra when making a song is to get your head to nod and your mouth to smile; if I can make someone do those things, I’ve accomplished my goal. The yearning for your head to nod comes from me being a drummer. I got my drumset in fourth grade and banged on them until about tenth. However, I have always been heavily drawn to bone-chilling melodies or sounds even though I cannot play any instruments other than the drums. Anything that makes me feel or go to a certain place deep in my memories attracts me. Also I just think about my girlfriend, Kelsey. She is my inspiration for life and that definitely inspires my melodic sound.

A goal that I have had for years is finally coming true next month, an album. I have always wanted to put together a body of work that describes me as a person and “Palindrome” does. Another is to keep showcasing my music to the country. I am currently on tour with CharlestheFirst and it has been a dream come true. He is an amazing person who has already become a brother to me this past month and I am more than grateful to be on these shows with him. Something we talked about in great detail the other night was how much that the hour we are on stage means to us. There is no greater feeling than giving your all to the crowd and completely letting go and being yourself, which was a hard, yet major goal for me to accomplish. But I would love nothing more to tackle more personal milestones this next year, AND to see my friends accomplish theirs. Also, me and my boy Black Carl! have this side project, “Integrate”. We have already released an EP and are currently working on a second one and have some shows on the horizon!

And just a side note because I get asked this so often, my name is pronounced “vector” 🙂

Continue Reading
You may also like...
Related Topics:bass, Electronic