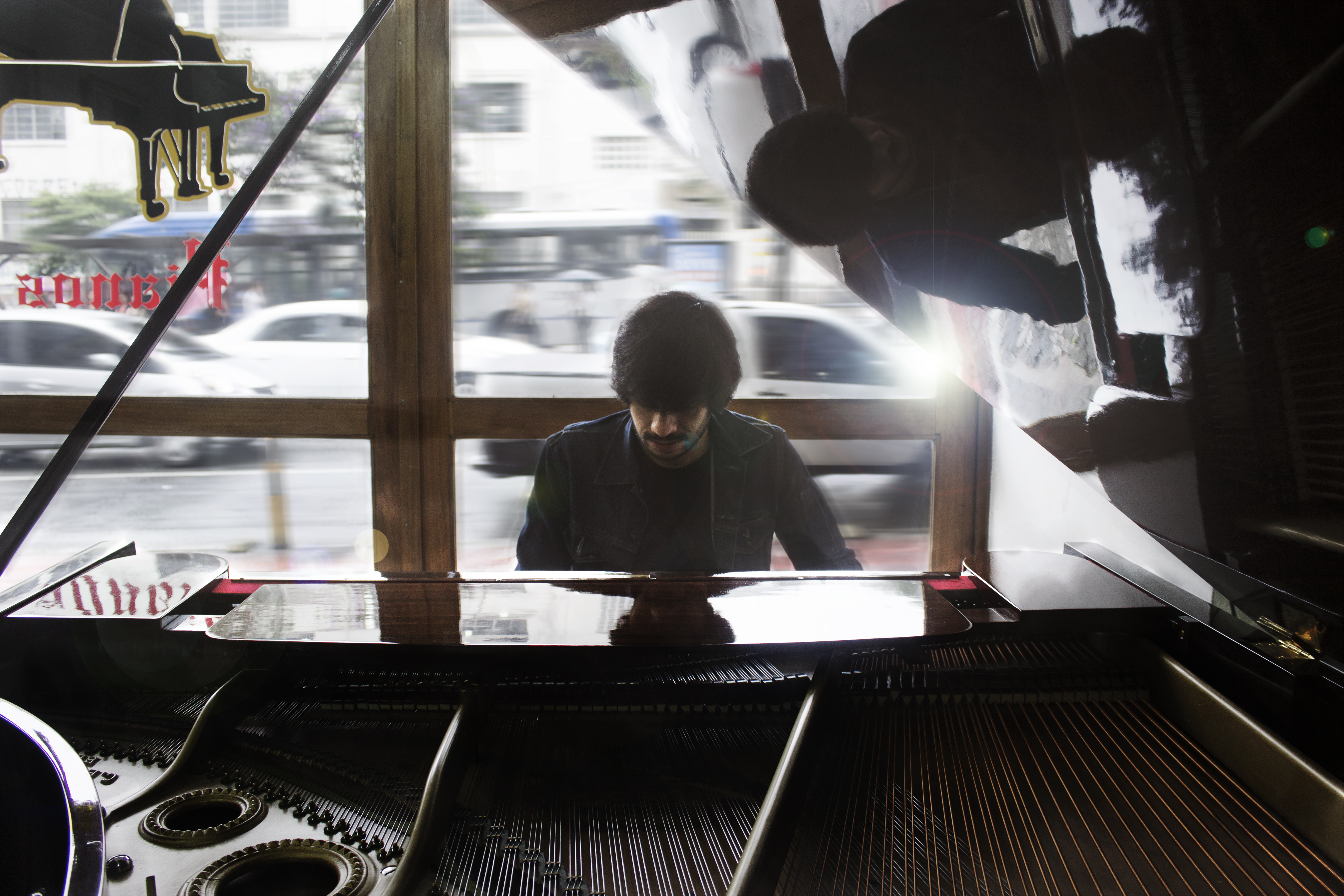 Music fascinates me since I was a child. I learned to play the guitar with my father when I was 7 years old. A few years later I started studying piano and keyboard and never stopped. I grew up in a highly musical environment: my father played guitar daily, my mother was a singer, therefore at the family gatherings there was always plenty of music.

You are one of the best up and coming musicians we have encountered on the internet! And your track “Jazzual Suspect” is probably your best track yet! Could you tell us more about the story behind this track?

Wow! What an honor and joy to hear this coming from you! My idea with “Jazzual Suspect” is to convey to the listener the sensation of walking alone at night on a dark, empty street in a dangerous neighborhood in São Paulo or in any other big metropolis. At some point in this lonely night walk you might find someone suspicious walking towards you and then suddenly fear strikes.

I recorded a jazzy piano theme to give the sensation of artfulness, smartness, agility. The piano represents “The Suspect”, the person walking in the gloom, like a nimble and dangerous thief. The subtle sound of water in the background was captured in my own kitchen at home. Some of the voices and machinery sounds I captured from the next-door building which is under construction.

Because I love cinema and videogame soundtracks, I usually imagine the scenarios in order to compose my beats. The name of this track is a double tribute: both to a movie I love, named “The Usual Suspects”, and also to a project by the music producer Charlie Tate named “The Jazzual Suspects”.

My instrument setup consists of a Rubenstein acoustic piano, two electric pianos (Roland and Yamaha), a Novation controller and several guitars and electric guitars. For audio recording I use an Apollo Twin Duo MK II.

My favorite DAW is the Logic Pro X. But I also often use the Ableton Live because its “Session View” is wonderful. The finalizing and mixing of the tracks is done on the Logic Pro X. For plugins I like the EQs by FabFilter. And I also use some of the compressors by Universal Audio, such as UA 610-B, UA 1176 LN and the UA CS-1. I also subscribe to Splice.com, there’s lots of good stuff there. To create the master I generally use the LANDR.

Thank you very much! Although music has been part of my life since childhood, I ended up graduating in Law and working in another profession. When I realized that this was not my path, I dropped everything and decided to dedicate entirely to my true passion: music.

In addition to playing the instruments I also chose to become a music producer and have been studying the techniques and tools of music producing. I chose a DAW (Logic Pro X) and have dedicated a lot of time to it. I also studied production techniques in depth, such as equalization, mixing, compression, etc. I watched lessons on YouTube, Lynda, Udemy, and read books and magazines on the subject.

Yes, I am a professional jazz pianist and keyboard player. I have performed in many concerts, have toured Brazil with several artists and have developed music projects. I have extensive knowledge of music theory, harmonization, composition and improvisation, mostly derived from the dedicated study of jazz. I also play the guitar, especially bossa nova, samba and Brazilian popular music.

When I am producing I try to blend all these diverse aspects, always including a touch of jazz, bossa nova, or Brazilian music. And I use a lot of real, organic instrumentation. Being a musician helps me immensely with the music production.

In the next few months I plan to release an album of instrumental beats with previously unreleased tracks, as well as with already known singles such as “Jazzual Suspects” and “Macaco Nu Jazz”, amongst others.

I am also putting the final touches to an album of original songs, highlighting my work as a singer and songwriter. It is an album of Brazilian popular music written by me, which should be released within the next six months.

Finally, my main objective for 2020 is to tour Europe and the United States. I want to show my music in a live setting, with my band. We play “Jazzual Suspect” live and it is a wonderful thing. It is a show where we blend hip hop, jazz, electronic music and Brazilian music.

Continue Reading
You may also like...
Related Topics:Trip hop