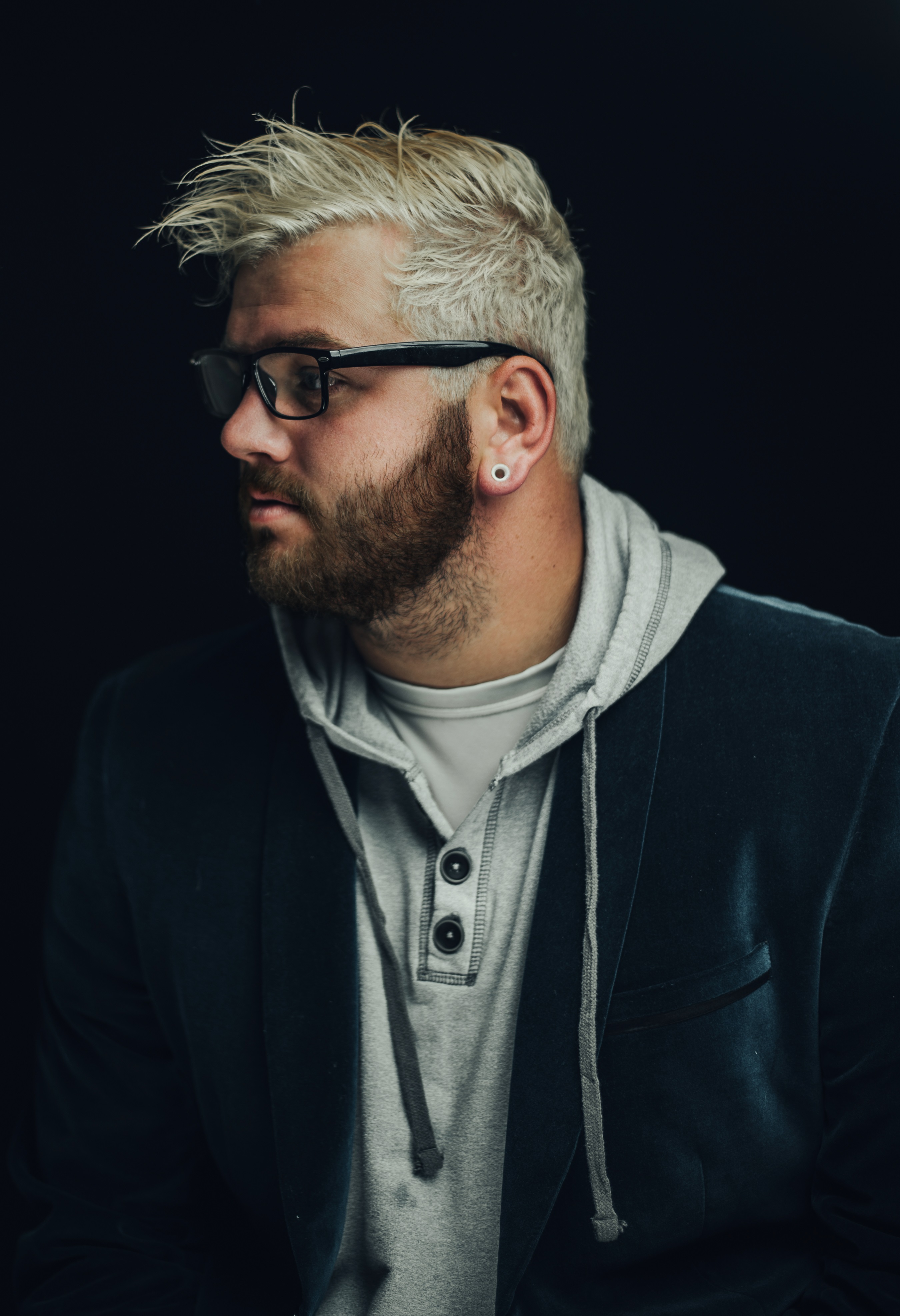 I started playing piano at a pretty young age, so learning music theory and the technical side of things became a part of my life pretty early on. Although, digital music production gave me the feeling of not only playing the part of the pianist, but to be the entire orchestra, and conductor combined. So I guess just the endless amount of possibilities of what you can do through sound design and digital arrangement probably played the biggest part in drawing my interest.
As far as what drew me into producing future bass goes, I’d say I just kind of fell into it?  I tend to just write whatever sounds pleasing to me at the moment, rather than trying to restrict myself to a certain style. I guess it just so happens that what sounds pleasing to me more often than not ends up having a future bass vibe.

“Mr. Po” is a very unique producer name, how did you choose that name? Any special meaning behind it?

There is actually a little bit of a story behind the name. A few years ago, I was working for a psychiatric hospital as a nursing assistant. So.. That statement alone comes with some pretty fun stories, but we won’t dive too deep into that. Anyways, my first name is Marc, and one of my coworkers at the hospital started calling me “Marco Polo” for a good while. After a few months, “Marco Polo” turned into just “Polo” and from there, “Polo” became just “Po.”  She’d come bursting through the doors yelling “Po!” all throughout the unit anytime she needed anything. It was only a few months after I left that job that I had decided to start taking music more seriously, but I wasn’t all that set on using my legal name as my producer name.  I remembered liking the name Po, and it was definitely the most unique nickname for Marc I had heard so.. Mr.Po, it was. Plus, it’s kind of goofy so that’s fun

You haven’t released any new music except for “New moon” in 2018 any reason behind it? Can we expect more frequent Mr. Po music in the near future?

Actually, yes. I released a remix of Praying by Ke$ha late last year, which at the time was some of my best work, in my opinion. Pretty shortly thereafter, writers’ block hit me like a baseball bat to the face. It felt like I had lost my music mojo, so to speak. So I took a little break from the music, ended up moving across town, accepted a new position at my job, and all around took on a bit more general adult life responsibilities. I was still doing my best to occasionally sit down and try to get the musical waves flowing again, and was actually getting going on quite a few projects during that time. Still, none of them were reaching up to my standards of what I knew I was capable of producing though. Nor were they reaching my standards of the quality that I wanted to release to the public. I try and keep one general rule for myself that if I, myself, wouldn’t jam out to it? Then it’s not hitting the mark of what I’m trying to grow the Mr.Po sound to be. So it was a frustrating time with a severe lack of inspiration, to say the least. With that being said, I believe that struggle and lack of inspiration was completely necessary for me to experience to grow as a musician. It gave me time to come to terms with and embrace the fact that you can’t force inspiration when it just isn’t there. It gave me time to learn A LOT more about sound design, mixing, and the importance of organization and intent when producing. I even learned how to DJ during that period. Coming into 2018, I told myself this was going to be a big year for me, creatively. I didn’t quite know in what way, and definitely didn’t expect it to have gone the way that it did, as far as my music goes. But sure enough, it turned out to be a big year of creative growth and improvement. You can absolutely expect to see much more Mr.Po music coming very soon! New Moon was only the beginning.

Your latest track “New Moon” is your best track in our opinion! From its artwork to the Incredibly powerful sound we absolutely love it. Could you tell us more about the story behind this track? Also, what is your creative process like?

First of all, thank you! I very much appreciate the love. I would 100% agree that this is my best track yet. The story behind this song leads right in from where we left off on the reasoning behind my almost full year of zero new music releases. As I said before, I had hit a pretty severe slump and felt like there was no way for me to get the creativity flowing again. At some point halfway through the year, something happened that you’d probably assume to have been devastating. My computer crashed completely. This happened shortly after I had dropped and ruined my external hard drive, which I always used to back up all of my work. After having my computer checked out, close to nothing was able to be recovered. This meant that I had lost literally every one of my music projects. Finished or unfinished, every single file was gone. Sounds pretty awful, right? Nope. I was good. I was pretty weirded out that I was good, but I was good. In fact, I was almost excited about it even? It just felt like whatever I needed to happen to help me reset my brain and find inspiration again, had happened. It completely flipped a switch and felt like it gave me a clean slate to start over. Now, if you’re having writers’ block or any sort of creative struggle, I don’t recommend throwing your computer out the window or anything, BUT… Apparently, I needed to lose every bit of the old to be able to bring in the new. So I got my computer back, opened a blank project, and just started throwing some piano chords together. Mind you, before any of this happened, it would typically take me a month if not longer to finish or even get halfway through a song. I started with a few piano chords and from there wrote an entire track to completion in a little over a week. I told my good friend Hannah, about how I had lost everything and was suddenly filled with inspiration and was starting to write music with a different outlook, a clearer head and with far more ease. She said the timing was crazy because the day my computer crashed was the day after a new moon. That specific new moons astrological meaning said that now is the time for finding new and inventive ways to progress and to start fresh. At that point, I felt like nothing would define the track better than to title it New Moon.
My creative process often begins somewhat randomly. Occasionally, household sounds or sounds that I hear when I’m out and about can spark an idea, or simply listening to different genres of music and drawing inspiration from what sets their specific production style apart. Once I’ve found my starting point, the idea tends to start growing from there and I’ll hear what I think would fit best moving forward in my head. There’s always plenty of trial and error too, but I try to just trust my ear and keep moving, rather than obsess over the small things and get myself stuck in one spot. I do also wanna take a moment to give credit where it’s due real quick. The final mix and master for New Moon, as well as a few of my soon to be released tracks, was done by a fellow Texas based producer, M.E. Swank. This track wouldn’t be near as powerful and crisp without the work he put into it. On top of his impeccable mixing skills, the guy can produce some heavy trap like nobodies business. So if you’re searching for some tunes to throw down to, he’s your guy.

Your tracks are very well produced, and we can’t believe you have only started producing 5 years ago, care to share more about your journey as a producer and when you started?

I know I only touched a little bit on how I first got into music, so I’ll give you a little bit of a backstory. Music first began for me when my parents signed me up for piano lessons at the age of six. THAT was the strikingly magical moment that my passion for music was brought to life.. By that I mean, I begged them to let me quit on numerous occasions, so strikingly magical may have been a misleading choice of words. However, it was my first step into what would eventually be a passion for music, and I continued taking lessons for twelve whole years.  According to my parents, I had an ear for music so calling the quits was not an option. But they also repeatedly told me that I would end up thanking them later so HA!! Jokes on them!…. (I totally thanked them later.)
Around the age of thirteen or so, my brother in-law introduced me to a computer program that allows you to compose, arrange, edit, mix and master your own music. The program was called Fruity Loops. I had seen him making some pretty slick beats with it, so I thought I’d give it a shot. It was confusing as hell.. I loved it! Starting out, I was primarily making hip hop instrumentals, because I hadn’t fully driven my interest into the world of EDM just yet. I also had no idea what I was doing, so that’s probably a factor. Cut to around eighteen, my love for EDM began to grow substantially and my understanding of music production had improved a bit as well. So I started producing my own dance music, but on more of a hobby level. It wasn’t until two years ago, at the age of twenty one, that I had decided pursuing dance music was a dream that I wanted to make a reality. I actually remember there was a specific day, I had just gotten off work and I texted my good friend Jack, just to say that I had made up my mind and that I wanted to do this music thing and really start taking it seriously.

Release more content, break into the live performance scene, and a general goal I hold for myself at all times is to never stop learning as much as I possibly can to improve. I’ve got big plans in store for this coming year, for sure. Tons of upcoming projects that I’m super excited for y’all to hear! So get excited and stay tuned!

Catching Up With Moontype
HBT Chats With ANTHEM