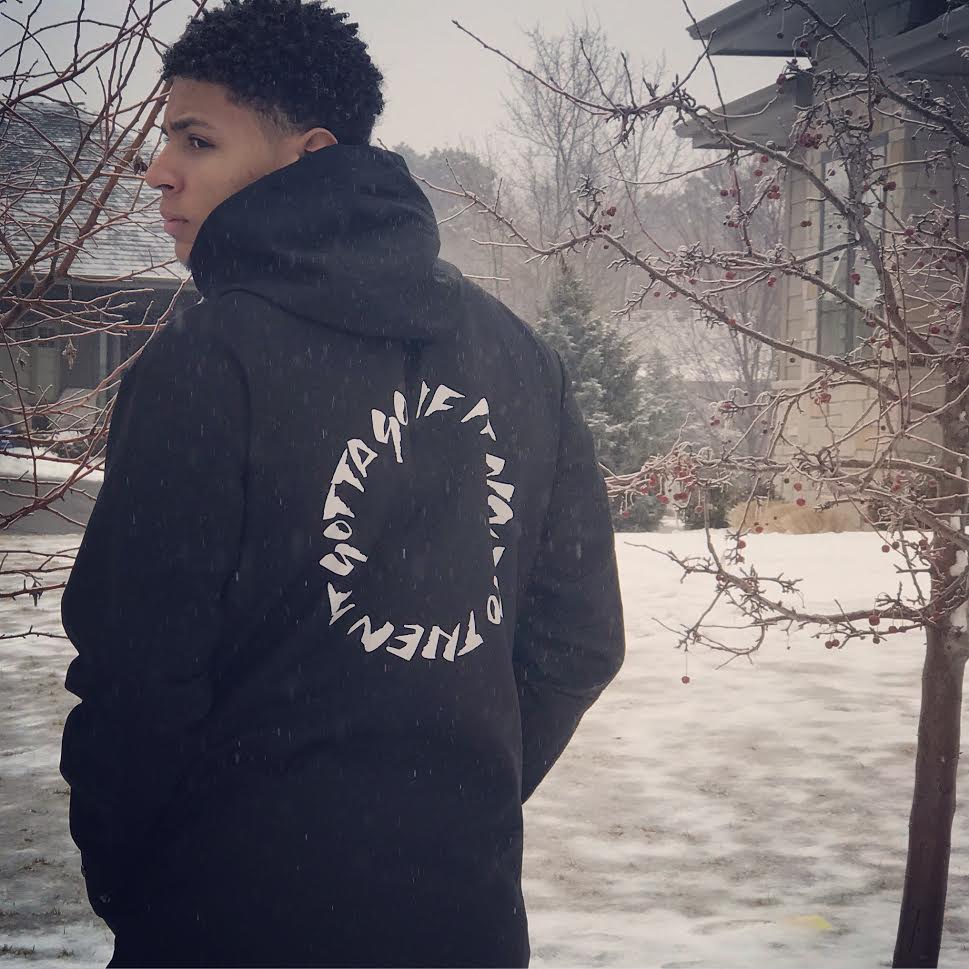 In all honesty, growing up I was a fan of Rock and Roll and anything that I could bang my head to and scream. I never really got into a particular artist as a kid but I was always listening to music and copying them as close as I could. I remember standing on my mom’s brown coffee table in the middle of the living room, holding a fake microphone and channeling between many different genres such as Rock and Roll, Hip Hop, Pop, Hardcore rap (I know such great parents), Soul, Jazz, etc. Music was always a part of my life. As I got older and started to understand lyrics more, I leaned more towards the Pop/Hip Hop side of music. After a little more time I kind of grew out of pop if that makes sense and I started to listen to more Rap/Hip Hop. I would say it’s most likely because of the environment I was living in and it was the most popular choice. Ever since then I would hone my old love for the other genres from time to time but I primarily would play Rap/Hip Hop because of the emotion, beat, diversity, and the lifestyle the stars were living.

Your track “Okay” is very modern and the lyrics are amazing! How did you achieve such a great signature sound in such a short time? Also, what is your creative process like?

Thank you very much, I honestly just put that track out as a message and didn’t really think it would shine in the light of my work. I never want to sound like someone else or give the opportunity for people to compare me to another artist, and that motivated me to be different than anyone I’ve heard and to be unique as I can be. I wanted people to be like “That sounds like Cxpid.”  It comes from the heart, I rarely sit down and say I’m going to focus on making a song right now unless a producer sends me a beat to use, then, in that case, I want to work with them as soon as I can. I can’t freestyle so to save my life and clear that aspect of my creative process, I write almost all of my songs without a beat. I would get a catchy few bars or a smooth hook in my head and I will sing or rap it over and over until I can write it down on my phone, then once I have that melody thought of and written I go off of it and create more. Sometimes I would leave it alone and come back to it, sometimes I like the way it’s feeling and I will literally write an entire song from beginning to end. The tough part is finding a producer or a beat to match with my cadence and delivery but once I do, it’s heavenly. I will then find time to study over my lyrics and get it perfectly tuned with the beat so I can move into the studio and record.

You have worked with many great producers/artists in the past, If you could work with anyone who would it be?

I have always dreamed of working with many artists, such as Trey Songz, Drake, Swae Lee, and many more of that category, but if I had to work with one artist it would be hands down The Weeknd.

You have recently released a track titled “Halo” Featuring Big Lou. The track is a modern Hip-hop track but it still retains that old-school soulful vibe. Do you plan to release more soulful sounding tracks? Also, who inspired you to develop such a rich taste in music?

Of course, I loved making that song with Big Lou he is an amazing artist and even better producer, we literally were just hanging out in his studio basement and he has the creative ability to produce on the spot, which he was playing around with some 808s and High hats and I mentioned a lyric about seeing a woman’s halo, and the sparks flew he whipped out the beat and we took turns going in on the mic and jotting down lines. We made that track in about an hour and a half. I most definitely have the plans to make more soulful type of music, it may be a different kind of soulful as Halo but it will definitely have soul in it. I love listening to John Legend, Bruno Mars, Alicia Keys and many other modern soul artists, but I would have to say my biggest inspiration in music would have to be The Weeknd. There are days maybe weeks when I would listen to his music nonstop. I listen to all of his music whether it is a feature or his own. I will say I was heavily influenced by his older music like The Noise, Trilogy, and my favorite album of all time from him; KISSLAND. I listen to Abel almost every day, studying his vocals, dissecting his doubles, and ad-libs. He truly inspires me, he has come so far from his older music and is humble about it, for the most part.

I plan to continue to grow and create as much as I have the opportunity to do so. I have people in my circle who are talking about getting me paid shows. Which are nice, but I would love to tour and spread my energy and music to many people across the world. I am not from the city I am currently living in (Omaha, NE) and it’s harder for me to reach out to listeners and other artists because they don’t know who I am or necessarily like my music, they grew up on their local artist kind of music which I don’t bring to the table. That won’t stop me from being me and creating the music that I create, it only inspires me and motivates me to make music you can’t turn down.

What are you goals for the coming months, any upcoming projects we can get excited about?

These upcoming months I will be working for a company that will require most of my time but when it’s over I will be working on a 7 track project with Producer Aloidd (Big Lou) and Engineer Trey Vance who I worked with most of my first project “Page.1” This project has taken a long time to come together because I have been dealing with the struggle of life which will make my music even better. My goal with this project titled “FACTS” is to have every song sound different and to come from only what I know, I will not be exaggerating, lying, or putting myself into a character as I have done before. I am very excited for the world to hear my growth and discover my versatility. Look forward to FACTS coming late 2019 to early 2020.