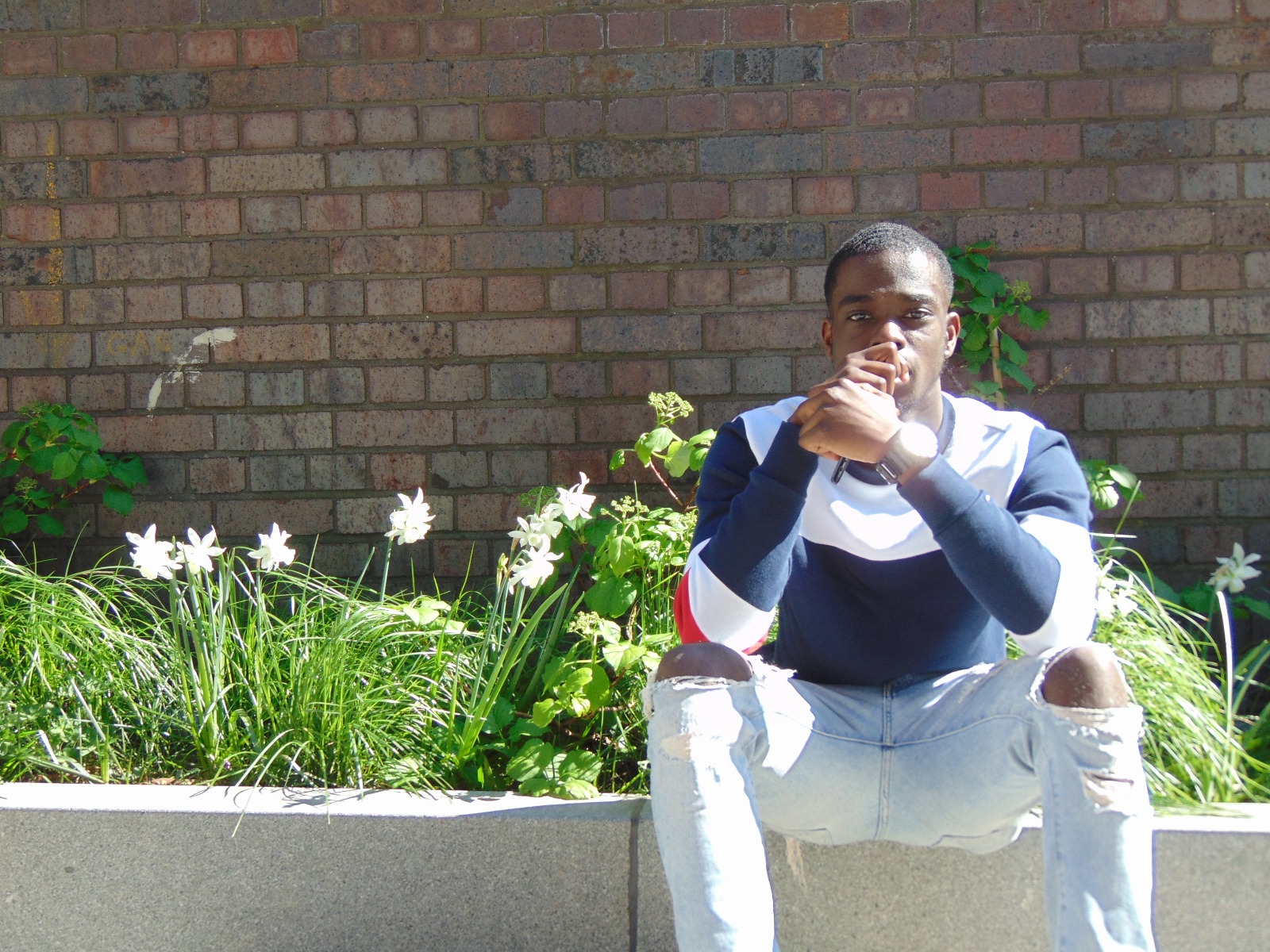 Growing up as kid I’ve always been surrounded by music from listening to a lot of R&B/Soul with my parents in the car to my brother’s friends creating music which introduced me to a lot of Hip-Hop/Rap music. Just through hanging out with my friends introduced to new music and new genres that I did not usually listen to. I have always had a good ear for music, so I started to DJ from time to time after school to find new music from artist I listen to or from new artist. After DJing for a bit I was randomly one day just scrolling through YouTube and stumbled upon a video of an artist I listen to named Tunji Ige. He was breaking down the structure and sounds he used for a beat he made to one of my favourite songs by him called “On My Grind” and ever since then I’ve been locked in into producing and engineering my own music. I’ve now been producing for 3 years and a little motivation from one friend I met in university and listening to Roddy Ricch made me start to take it seriously a year ago.

Your track “Better Instrumental” is absolutely amazing! How did you achieve such a great signature sound in such a short time? Also, what is your creative process like?

Thank you, I appreciate that a lot but, I personally do not think I have found my signature sound just yet but I’m well on the way. I believe when I’ve found my signature sound, people will be able to recognise my production straight away and say, “that’s an Ako beat”. Just like if a Timbaland or Neptunes beat were to come on right now we would straight away recognise it, because of the impact they made in industry and the sound they discovered. My sound currently now is R&B/Soul and Hip-Hop/Rap and this is heavily influenced by listening a huge amount of songs to the producers that I’m inspired by such as; Pharrell Williams, Timbaland and Mustard. Not only just listening to their sound but also understanding the amazing things they have done as well as the mistakes they’ve made which helps me overcome challenges in production and to maneuver better with my career in music. To add on to that I’m also Ghanaian so I’m quite inspired by my African culture and seeing the growth of Afro-beats and Dance-hall music has made impact onto my production which will see more of in my upcoming beats. I have more than one creative process, but they all align with each other. When I’m uninspired to make something new, I go search for music that I was inspired by. Not only am I inspired by music though, I am also inspired through my experiences and listening to what other people I respect have gone through and the music they listen to. This was how Better was made in fact. I was on Instagram going through stories and I saw a story from an actor called “Damson Idris” listening to the song from where I got the sample (“I Can Love You” by Mary J Blige feat. Lil Kim), after hearing 7 seconds of the song, I already knew what I wanted to do with the instrumental straight away. Normally when I start the process, I initially try starting the beat different ways than the one prior and make it better than the other one before. Recreating the mood, I was in or creating a vivid picture of the idea I had when making the beat is also part of the process. I also sometimes try reverse engineering the songs I love listening to, to recreate the feeling I had when listening to it. When I started producing, I used to always try and think of an artist that could go on the beat, but this habit stopped shortly after watching an interview from T-Minus. He mentions during the interview that he never thinks of the artist during process of creating because it ends up making something the artist has already made. After hearing that, it came to my attention that not all artist knows what they want. Sometimes they need that push from producers so that they will know what they want when they hear it. Just like us producers we do not know the exact signature sound we’re going for but once we press that note or chord, we know that’s the sound because it will either work with you or not.

Yeah, I love to experiment with new sounds for sure. I feel like that’s the only way to increase my bandwidth in terms of sound. If I were to continue using the same sounds in every beat I made, I feel like I would not be growing as a producer. One friend I have that also makes music told me once that “every idea sounds stupid until you do it” therefore I took that on board for when experimenting sounds. Sure, I would be very good at one or two genres however, I would find it very hard to be versatile because music is always changing in this industry. The sound we had 20 years ago does not sound the same to what we have now and if we want to be able to make an impact, we must have the ability to adapt as the music culture shifts. My set up is nothing to fancy. I just produce where I’m most comfortable and most efficient, which is in my bedroom with some good studio monitors and a good microphone. I do not always produce in my room though because even though you can get locked in, I sometimes go to other studios just to hear what my beat is sounding like on different speakers. As well as to collaborate and meet with other artist because sometimes the energy you get from studio session can lead into creating something phenomenal. My go to plugin is probably purity. I like adding a lot of melodious elements in my instrumentals. I feel like purity just matches the sound I like searching for a lot of the time from synths to bells and plucked sounds. I love sampling too, but I don’t really use any plugins to chop up my samples. I think I’ve found my own unique way of sampling and it’s not something I cannot really explain without showing you. Just recently I’ve also started using some flutes and guitars in my production to build a beat or add some sounds that are missing from the beat and sometimes using my own voice to create background vocals.

When I was younger, I used to play the steel drums and in a choir. I play a little bit of piano and keys. I now started to pick back up on those skills and added learning the guitar as well. I have not started learning it yet, but I would like to start playing violin. Listening to Kendrick Lamar there is a lot violin incorporated sounds in the production and to me I think I can somehow transfer that into my sound. I feel learning these skills will improve the sonics of my sound and make it even more authentic because it’s all good using sounds from the keyboards on the software, however there isn’t enough natural sounds anymore. Plus, in my opinion real life instruments always sound better especially with live performances.

There is a lot of goals musically that I want to achieve but, I must make sure that I’m having fun whilst doing it because I’m doing something that I love. A lot of artist nowadays make songs that are upsetting, which I’m not saying is bad because I listen to that music to sometimes. It makes you aware of what’s going on in the real world or what their life is like. Improving my skills as a producer and a songwriter is very important to me because it will open so many doors for me. My goal is to make music that matches my personality and let the world have fun with it. Another goal of mine is to be able to make impact in industry in finding a new sound just like the people that have broken doors for me and I’m still following. Since I have interest in all music, I am to be able tap into other genres such as Afro-beats, Dancehall, World, Electronic and Gospel. I believe a mixture of these genres will help me find the sound that I’m trying to create. I would like to work with the producers and artist I enjoy listening to. Also, to build an artist as well because it’s crucial to find new talent. Becoming an executive producer is one of key aspirations and eventually being able to create my own albums too. One more musical goal I have is to make music also for tv shows and movies not just beats since I’m invested in videography and screenplays.

Ever since Better was released the beats I currently have in my arsenal are even better than that instrumental (no pun intended). I just released another beat called “Do Not Disturb” a couple days ago and even though it’s good beat I still don’t believe that it is better than anything that have been making recently. I’d say from my releases that you’ve only seen about 5-10% of what I’m capable off. Over the next few months I will be showing more of what I can do. I plan to focus a lot more on myself and build a momentum by releasing a lot more. Trying to collaborate with other artist and producers and just see what we can make. Keep active and document the process of my work a lot more too. More importantly just to keep the mentality I have right now because over the last few months I was not in the best place mentally and I feel that interrupted the process of my making. Although this happened, I’m appreciative that it did because it’s made me grow as person, a producer and it has made respect the journey even more. In terms of upcoming projects, I would not say there is one in the making except for just releasing instrumentals and potentially with artist too. Although I may change my mind further down the line if I  think it’s necessary.

Continue Reading
You may also like...
Related Topics:r&b, Soul

HBT Chats With FUNKY CRAIG
Beatmaker from Hamburg, Meet B E N B A D A B O O M