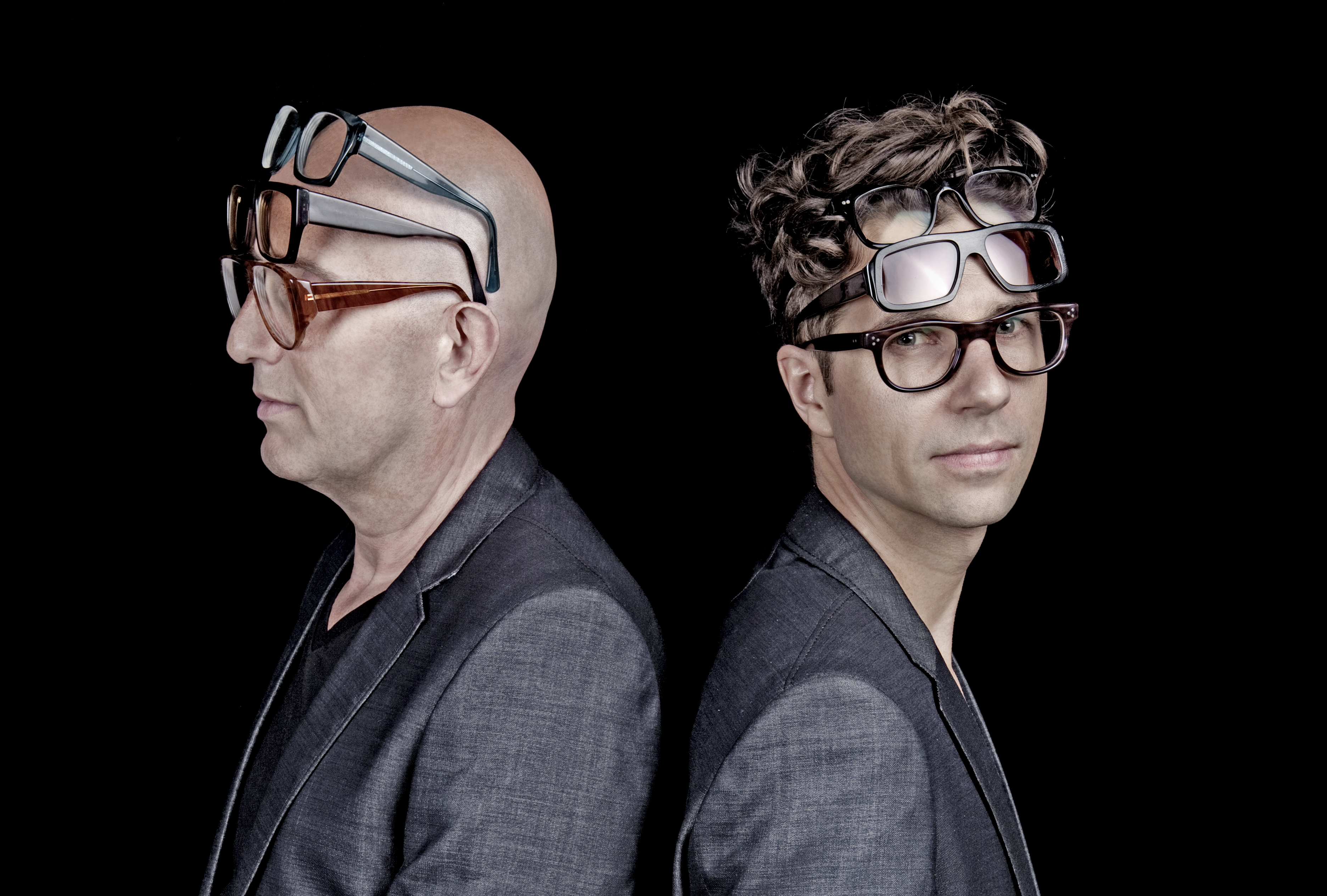 They’re legends, to say the least. Chocolate Puma, the Dutch house duo comprised of Gaston Steenkist and René ter Horst, sat down with HBT after their epic show at Montreal’s New City Gas (during which they wore highlighter yellow plastic jumpsuits) to discuss everything from how they came up with their ever peculiar name to who they’re scouting out as the next generation of successful producers. These two know the industry better than most, so read on for a peak into where dance music’s been, and where it’s headed next.

Although our readers know you as Chocolate Puma, you two have worked under numerous aliases. Why so many names, and why did you stick with Chocolate Puma?

René: In the beginning, we were using all those names because we were pretty anonymous in the studio. We wanted to release a new record every two weeks, and we were trying out different genres, so we did many tracks. But at one point, it was better for us to be one brand, and since we were having success with Chocolate Puma we stuck to that name, made that our brand, and put all the other projects to sleep. If we want to do something different, we just do it as Chocolate Puma, because we’re Chocolate Puma now.

How did you come up with Chocolate Puma? It’s a weird combination, if we’re being entirely honest.

Gaston: René used to design our record sleeves, and we had a new track we made with a singer from our hometown. Actually, it was the track I Wanna Be You—the first Chocolate Puma track ever. So we had this track, and nobody wanted to put it out! So we put it out ourselves and René designed the record sleeve, but you can’t really design a record sleeve without a name or a brand.

René: I was behind the computer, and I didn’t know we’d be Chocolate Puma for the rest of our lives, so I came up with the name. I don’t know why… Maybe I was wearing Puma shoes, eating chocolate… I don’t know. It came to my mind.

Gaston: So the next day I came into the studio and I saw the sleeve and the name and I was like “This is perfect. This fits the track we made so well.” So we just stuck with it.

You’ve both worked in this industry for a long time. What do you think of the evolution of music?

Gaston: I think the whole evolution is really great, because when we started with house music in the early 90s, I know a lot of people were saying “Ya, it’ll go away in like a few months. A few weeks, even. It’s a small trend.” But it’s still here and it’s stronger than ever. What’s really cool is that there are a lot of young producers out there that are innovating, coming up with new stuff, and I think it’s amazing that for more than 25 years house music and all its sub-genres keep evolving. That’s pretty special.

Where do you see the electronic dance music industry heading next?

Gaston: Some kid with a laptop, who probably still lives with his parents, is gonna invent a new genre.

René: Yeah, but I still think that while we used to have EDM—like big room, hands in the air, jumping around music—we now have like Oliver Heldens with what they call future house or deep house. I think that will be the next step.

Gaston: No… I mean, I don’t mind listening to it, but for us, dance music—club music—should have energy. Maybe somebody else is doing tropical house and having great success with it, and bless them, but it lacks the punch and energy we like.

Well, since you’ve been in the industry for so long and you’ve seen its evolution, what do you think of like pop/dance music crossovers?

René: When they invented house music everybody said “This isn’t music, because real music you make with guitars and bass and drums.” And now pop music is electronic music. Not all pop music is house, but it’s related to house.

You’ve discovered some great producers, namely Laidback Luke. Are there any up and coming talents that you have your eye on right now?

Gaston: There are some kids in the Netherlands right now that are protégés of Oliver Heldens. And he’s 19. Can you imagine? They are making productions that sound amazing. These are kids that are making this, and for me it’s really mind-blowing. For example, we have Voyagers, Curbi—a 16-year-old kid whose track we just played…

We absolutely love your podcast, “Throwing Some Tunes Together,” but the wait kills us. Any chance it becomes a weekly thing?

René: We want to do it every week or every month or whatever, but then we’re travelling or we’re busy in the study or doing gigs, and we’re like “Ah, we had to do the podcast!”

Gaston: We’re now selecting new stuff that excites is, and if we were to do a weekly thing, it would be more like a radio show so we don’t necessarily have to bring new tracks every week, we can repeat stuff. I think that makes life a bit easier for us. The chance of us doing a weekly show would be more likely then.

We know that some producers put like two days into their tracks and some put in like two years—what’s your process for building a track?

René: Sometimes we do it in two days, and sometimes it takes us two weeks. it’s unpredictable.

Gaston: Yeah, sometimes it takes months to mix it down the way you want; there’s this baseline that keeps sounding wrong. We’ve been making music for like 25 years now, but it’s still a challenge.

René: We’ll make a new track and then we’ll try it out one evening, but it’s really difficult because one crowd doesn’t necessarily act like another crowd. So we’ll make a track and the crowd goes crazy, and we’re like “It’s good! It sounds good!” Then we’ll play it another night, and nobody reacts. We have to see what people like; how they respond to the sounds we put in, the rhythm.

What do you think you would’ve done if you hadn’t pursued music?

Gaston: Well, for me, I can’t imagine not making music. It was always something I did. Maybe, um… When I was really young I wanted to be an architect.

René: I wanted to be a popstar!

René: Haha, I was always watching the bands on TV and I saw they could wear the nice outfits you couldn’t wear to the office, and I thought: Wow. I want to be that.

My friend is forcing me to ask you this because he stalked your DJ Mag Canada Instagram take-over: he wants to know what your favourite food is. Chocolate?

Gaston: Not chocolate for me.

If you could pick anything?

Do you have a favourite place out of everywhere you’ve toured?

Gaston: Canada has been very good for us.

René: Yeah, actually Canada’s more open to our sound—house music, deep house, future house—than the Netherlands. Normally, where we come from, people are very upfront, but now they’re sort of sticking to EDM. The United States and Canada are really open. Like, if you do a festival—we did EDC in Las Vegas last year—and you put an EDM DJ with his hands in the air, jumping around, and they like that, and after you put us and it’s more dance music, they like that also.

Gaston: We did a track with Laidback Luke, which we’ve never done. Last year we said to each other, “Why haven’t we ever done a track together?” So we went to the studio and we put together a pretty decent track. We also did a song with Tommie Sunshine that’s coming out on Steve Angello’s Size. And we’re working on a new Chocolate Puma single. We’re still tweaking it.

Are you going to be at WMC? What do you have planned for it?

Link Up With Chocolate Puma:

Continue Reading
You may also like...
Related Topics:Chocolate Puma, Interview