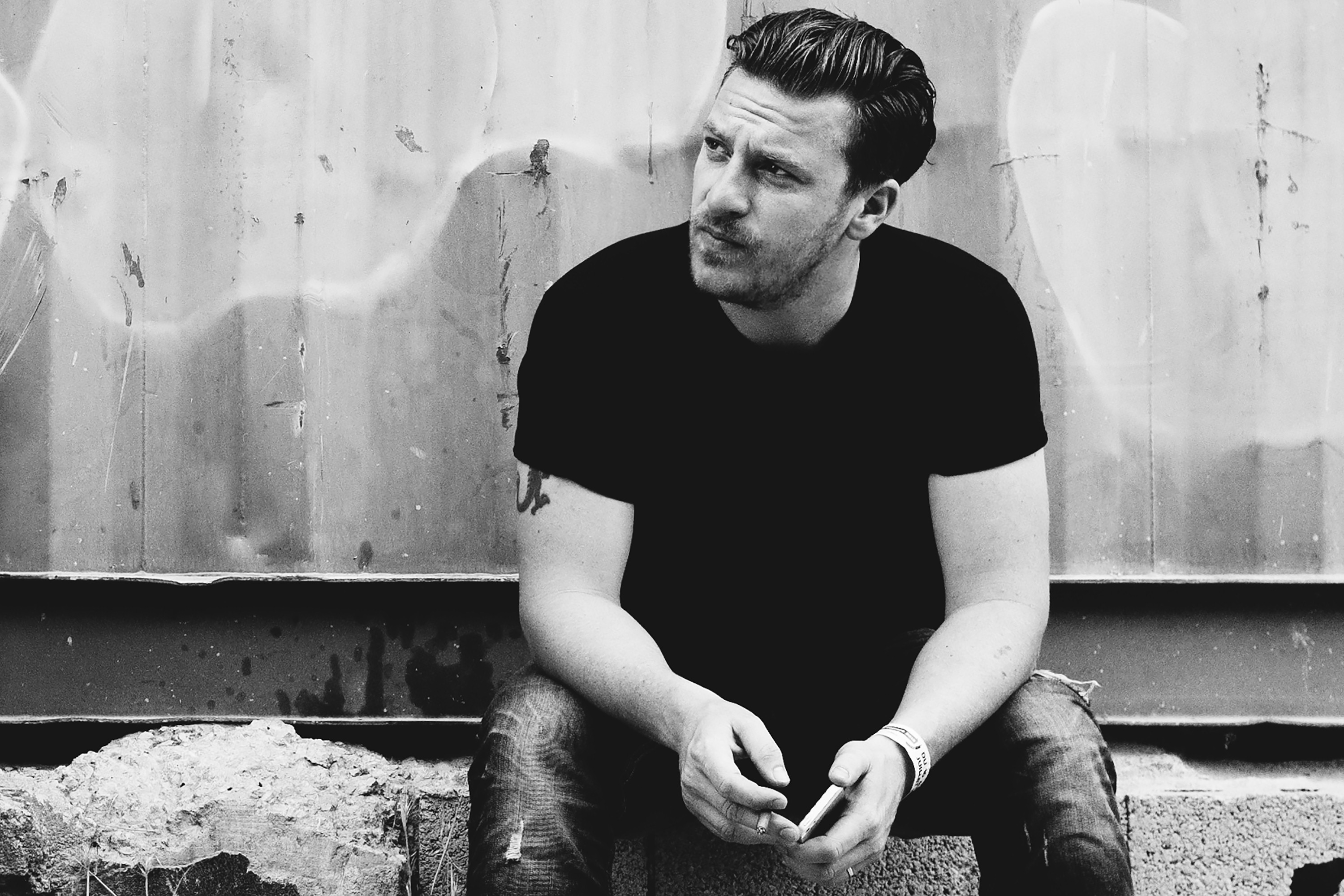 Depending on where you’re from and what you typically listen to, you may or may not have heard of Parov Stelar. But if you have, there’s no way in hell you don’t love him. Nearly every single artist will describe themselves as “unique” or “innovative,” but with Parov, those words may just be some of the only terms that do him justice. Some of the HBT Crew had the pleasure of hearing him perform live in France a few weeks back, and all the love and appreciation we had for his music was magnified tenfold. With his masterful tracks blasting through a massive venue, we were entirely overwhelmed by the sheer amount of creativity that goes into his music and the undeniable quality of his production. Read on for a (rare) peek into Parov’s world, and enjoy our track selections.

How did you get started off in Austria? What was your path toward your music career?

Well, I actually started off as a painter when I was 15 or 16, and then later on I studied art. Music came into my life at the age of about 19; I produced many flyers for all the techno festivals, and I got free entry for all the parties. I just thought: Oh my god. This is the best job in the world. You’re just standing there, drinking beer, partying, and you get paid for it. Then I tried to do it and I quickly realized it wasn’t as easy as I thought, but that was the beginning of my music career.

Do you still paint?

Yes, I still paint! If you see the cover of my new album, the Demon Diaries, that’s one of the paintings I did. For this album, I painted a whole exhibition, so nearly every song title has a painting to match. I’m a man who’s very easily bored, so I constantly need different challenges.

What first inspired you to mix swing and jazz with electronic music?

It happened by accident. I started producing with minimal house beats long before the minimal stuff became famous, and I was collecting old vinyl records I got from flea markets and such. I got this Billie Holiday record that was broken, and it started to loop, but at the same time it had a beat, so I thought I should record it. That was the beginning. The warm sound of her voice with the cold electronic beat was something new.

Your following is much more prominent in Europe than it is in North America – why do you think Europeans are more open to your musical style?

The U.S. is a huge country, and we’re from Europe. You have to start somewhere, and it’s easier to spread your word in your neighbourhood. It takes some time for it to find its way over the Atlantic, but I have to say at the moment nearly 30% of our fans are in the U.S.

Do you find there’s a difference in musical preferences between Europe and North America?

I would say electronic music is still pretty new in the U.S. Hip-hop was very strong for years, and then they discovered EDM as party music, but for me that’s a temporary project. You have a song, and then two months later there’s another one. In my work, I would say I’m known for a sound—not for a song. You can party and forget yourself during out shows, but I still want to give people quality. That doesn’t mean EDM isn’t quality, but it’s faster… It’s a different way.

Even though you use a huge variety of music in your tracks would you classify yourself as an “electro swing” producer? If not, how would you describe your musical style?

I sample different kinds of old music with new stuff, and of course the electro-swing stuff became famous so many people think that that’s all we do. But it’s much more than that; there are many different influences, and for me it’s really just the art of sampling. I guess it’s easier for people to just write electro-swing.

What’s your favourite genre to mix into a track? Or does it vary?

It changes every time, because as I said, I feel bored very easily. I really like this old swing stuff because these people were the first ravers; it was the same feeling in the techno revolution. They started to dance to music, and really party. In the new album I tried to go back to my roots with a more electronic sound paired with orchestral strings.

How do you go about finding the older music you sample in your tracks?

In 2004 you founded your own music label, Etage Noir Recordings. What motivated you to create your own label, and what goals do you have for your label going forward?

I sent out my music to labels and nobody wanted it, so it’s a pretty classic story. I was convinced my music would find its way so I decided to create my own label, and all I needed was a name. I was working in the basement of my mother’s house, and it was a really dark room, so I decided to name it Etage Noir. In the past years, the main focus was Parov Stelar, and I was trying to give other talents the chance to release their records, but it wasn’t that professional. From now on, we have a really professional team on the label side, and we’re going to start focusing a lot more on that.

Did you start producing first or DJing first? How long have you been doing both for?

I started with producing, and I’ve been doing that for over 20 years now. I can’t remember how long I’ve been DJing for. I never wanted to become a DJ to be honest, because usually I’m more the shy guy and I’m not born for the stage. I got so many requests so I started doing it and I noticed it was actually really difficult.

During your sets do you mainly play your own music or do you also add in other people’s tracks too?

Well, at the beginning I played different styles of music, but now it’s very difficult when you have Parov Stelar on the poster. People expect my music to be playing. The DJ sets are really rare at the moment, though—it’s mostly with a live band.

Do you prefer mixing your own music or incorporating other people’s work?

It depends. When I’m home, I like mixing with tracks from other artists, but when I play my own songs, I know them very well and I like the reaction of the people. I usually play with a saxophone and a trumpet player, so it’s something different than just playing the record. I can’t really compare the two.

Hmm… That’s difficult. I don’t really have a specific one, but I like hearing jazz music live. These days, every genre is in a way electronic-influenced, isn’t it?

If you could work with any musician, dead or alive, which would you choose and why?

You recently worked with Lana Del Rey—how was that?

It was pretty easy to be honest. I got the vocals, made the music for it, and tried to go in a different direction that the typical Parov Stelar style with this mix. She brought in the retro feeling, and I tried to give it a more modern instrumental. Many fans said, “Oh, that’s not Parov Stelar,” but it is.

What’s your process for creating your music?

I’m not the guy who can produce in a team with three people in the studio and everybody has their own idea. Because of the way I work with the sampling, it’s completely different than classical music writing, so I really need to be concentrated on the samples. It’s too complicated on the screen so nobody can really follow me. Let’s say somebody comes in and says, “Write me a pop song in A minor with 120 bpm,” that’s not the way I produce.

Is there somewhere you want to take your style next or do you just want to keep sampling?

In the new album you can hear more electronic orchestral stuff. I always try to move on because it’s boring to repeat yourself all the time. But you know how it is with the fans, some of them just don’t want to go with you. They just want Parov Stelar electro-swing.

Would you have any tips for aspiring producers out there?

The most important thing is that you create something unique; something nobody’s heard before. It sounds easy, but in fact it’s very difficult, and usually these things happen by accident. There are so many good producers and so many good singers out there, so you need to find something unique that people can instantly identify as your sound. Otherwise, just with good singing or good producing, you need to be really lucky if you want to have a breakthrough.

What’s next for Parov Stelar?

On the 1st of May, the new album is coming out. We have a summer tour until September, and then I really hope I have a little more time for my family. Besides that I’ll be focusing on my side project called Stelartronic, which is more deep house and house stuff. I’ll be saying goodbye to Parov for a few months.

Link Up With Parov Stelar:

Continue Reading
You may also like...
Related Topics:Parov Stelar, Stelartronic

Keepin’ Up With Krippa: The Boys Behind The Rising Design Studio
HBT Chats With VINAI Boys