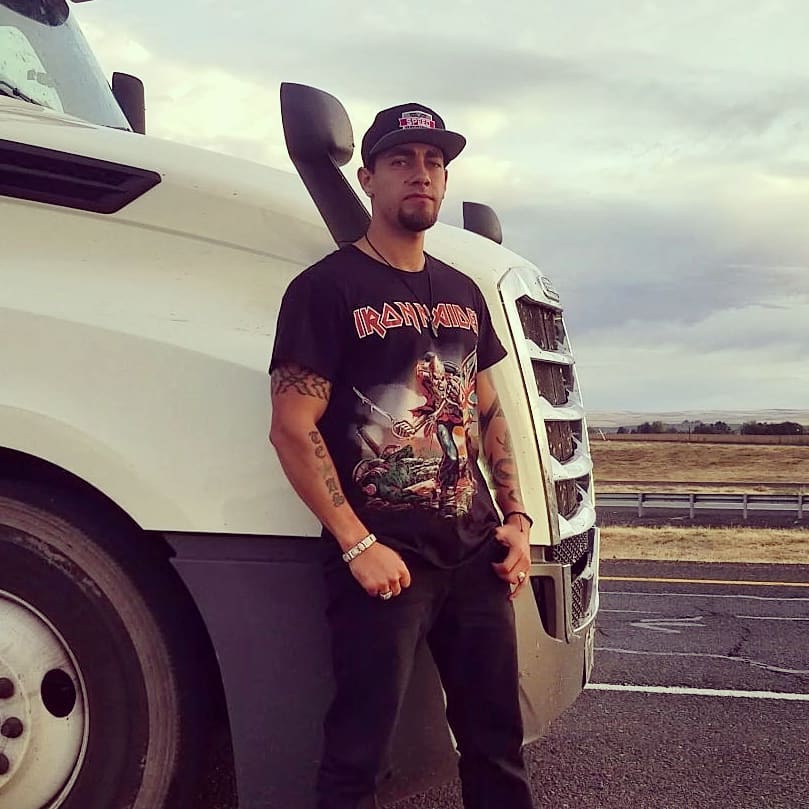 Since I was a kid I’ve always had a love for music. Mostly because my Panamanian side of my family would always jam out together when we were younger and also because my pops had a big selection of music choices as well. Anything from 2pac to Megadeth to some Marley, we jammed.

One of my brothers used to ride around playing that old school UGK, Z-ro, Paul Wall etc.. while I was with him so eventually I grew into listening to H-town artists on the regular.

Much love to my mom though for getting me into my roots with the Tejano and Cumbia though. Catch me on the dancefloor and wives will start to disappear!

Your track “Rose Petals” is absolutely amazing! How did you achieve such a great signature sound in such a short time? Also, what is your creative process like?

Thanks, I gotta give love to the engineer for the great mix and master for that, engineered by Cutta Classic at Castle Row Studios OKC, produced by Evince Beats & LC Beats. It’s amazing how great the song came out regardless of the fact that I drank probably 8 or 9 Modelos while recording that song in the studio. Great times, shoutout to my homegirl Jerri that was getting throwed with me while I recorded a Modelo masterpiece haha. I’m trying to get sponsored by Modelo one day.. in case they’re watching.

As far as my creative process, the way it usually works is I’ll buy the beat online, then I’ll listen to the beat a couple hundred times on repeat. After that I’ll start to think of how I’m gonna flow (rap) the song, if it’s gonna be a fast flow, medium, slow or a mix of all.. Usually fast and medium since that’s my style.. Then I’ll start thinking of the ‘plot and storyline’ of the song. After that then I get to writing a new musical masterpiece.

I put alot of passion into my music and my writing. I’m a lyricist, so every song y’all hear from me, I wrote, unless it’s a remix with someone else’s verse. And all of it is my true thoughts and feelings on things or my life story. My music can range from hustle positivity music, to deep stories, to enjoying life to the fullest (Rose Petals), and basically keeping it real and showing people the true me.

I mainly make music for dreamers and visionaries, people that want to truly succeed in life and be millionaires. So a lot of my music is about the hustle & the rise. Also it’s about placing positive vibes throughout my music to help people follow their dreams.. think of my music as a Law of Attraction accelerator. If you listen to it enough, eventually you’ll start to believe that it’ll happen, and from there the opportunities are endless.

Well honestly, it helps to have a decent amount of money and a quality studio to record at. You have to realize that in this day of age that competition is fierce, especially with all these rappers popping up left and right on SoundCloud and other sites. Many of them are in their closets and mixing & mastering their own music, some also with their own beats. Some sound great but the majority is lacking in quality sound.

So would you rather be like the rest, or pay for legit beats, recording sessions, and professional mixing? .. I started making some decent money as an oilfield truck driver and decided to do the latter. Each one of my songs cost me at least $500 to make, which includes a professional beat, and professional studio time to get the right sound. It pays to invest into your music… Not saying you have to spend $500 each time but I choose beat producers and studios that have quality sound and track record. It can be different for everyone.

As far as my musical background, like I said earlier my dad’s side of the family.. my mostly Panamanian side always had a love for all types of music, predominantly classic rock. So at alot of our get togethers, we usually jam out to some live concerts or play some music on the TV.

I grew up as a rocker/skater kid. My first favorite bands were Iron Maiden, System of a Down and Megadeth. Till this day I still jam and rock the f**k out. But as I got older I started realizing the actual words and lyrical life poetry of certain lyricists/rappers and I gravitated more towards southern artist like Lil KeKe, Slim Thug, Z-ro, Chamillionaire etc..

They all had a rise. Each one of them started off rapping about the hustle and the struggle, and now they’re rapping about the lives they dreamed of from the very beginning. And they got all my respect in the world, because I grew up witnessing their rise through music and fame. They believed it would happen, and it did!

When you listen to my music, I rap about living the dream and going far because I want other people to be motivated to keep chasing their dreams as well, at any cost.. even if it means being One Deep and doing it completely on your own.

It seems like you already found your signature sound. Do you have any tips for upcoming musicians that can’t seem to find their own sound?

Definitely, but I can’t call my sound unique, just a signature. My flow maybe but not necessarily my sound.

As I started making my songs, I never wanted to be an autotune artist. When I was making my first song Money Bag, I had told the engineer that, but when I got the final mix it was full of autotune. I wasn’t feeling it too much but decided to release it. Even though I didn’t like it, alot of my supporters liked the song and vibed to it.. it ended up being a fan favorite until I released Rose Petals. But that was the last time I’d let a song get autotuned like that. I got to work with Houston legend and multi platinum producer June The Jenius on that song, so I can’t say it was a complete loss.

Anyways, I decided to really listen to my favorite artists more and more, and one really stood out. Lil Keke, Houston’s own. Man I might be from San Antonio but I have mad love for Houston artists, they honestly changed my life and the outlook I have. Anyways, if you really listen to Lil Keke’s music, you’ll hear that he rarely uses autotune. It may sound like he does but what he really does is record the same song, but singing/rapping in different tones each time he records, it’s called voice overs. Many of his songs use 3+ different voice overs, so I decided to do the same and try it out.

On my 2nd song, The Beginning, I did that same thing. I recorded the song twice, each with a different tone, 3 tones for the hook. From there I recorded my song, Worldwide, with 3 different tones and 4 for the hook. I finally found my true and favorite sound with my latest single Rose Petals, which was recorded 4 times, each a different tone. You have to really pay attention to hear but my music is 99% me, with the 1% of autotune on some small parts of my hooks. So when you’re listening to Rose Petals, the whole song is being sung in 4 different tones overlapping eachother the whole time, cool huh.

As far as other artists interested in their own sound, I’d suggest finding out who their favorite artist are and really paying attention to the way their music is produced and recorded, I mean really pay attention with some solid headphones so you can hear everything.

Also you have to think about the music that your target audience listens to. If you’re a southern artist targeting a southern demographic, then it wouldn’t make sense to sound like a west or east coast rapper, you feel me?

Me, my target is the south. Once you get your respect and love from the south, you really don’t have to worry about anything else. But like I said, that’s just the target, not the goal. I’m trying to be a household name around the world.

I’m expecting that in the next 2 years, before 2022 that something will happen and I’ll blow up, I just gotta keep doing what I’m doing and it’s gonna happen.

I’ve already achieved one goal, to be a globally played artist. And that is thanks to one of my Rose Petals remixes featuring Med, my boy from San Antonio. The remix went viral on Spotify and I now have over 60 countries jammin my music, I’m humbled.

I also want to perfect my flow and my style of rapping so that I continue to have my own unique style of music. I like to call my style Southern Fusion, which is a mix of slow-medium paced flows and rythyms, with fast & full throttle bars and beats. You can hear it in my song Worldwide.

Z-ro, a Houston artist, has always been my top inspiration when it comes to my music. He gave me the motivation to get out and just do the damn thing. He used to be a part of a rap group called Guerilla Maab and ABN, with another artist named Trae Tha Truth. Both of them had that fast type of flow mixed with a slow-medium flow so I guess that was my inspiration for Southern Fusion. I just happen to be the first person to put a name on it I guess. But still trying to perfect it so that it’s truly unique to my sound and name.

But more then anything, I just want people to really vibe and feel my music. Alot of my music is based on the hustle and especially the big rig hustle since I’m a full time over the road truck driver outside my music career, so my biggest goal is to have a huge fanbase of truckers outside of my regular fan base. I’m ready for my albums to be in every truck stop nationwide!

Honestly I just wanna have at least 50,000 monthly listeners by the time 2020 is done with. Hoping that most of them will be from my home town of San Antonio but my city is hard to please, especially since the music scene isn’t that big down here. LA is one of my top 5 listening cities so I’d love to have Cali and Texas as my biggest supporters.

I haven’t released the date yet, but at the end of 2020 I’ll be releasing my first full length album called Forever Independent. Planning to have around 20 songs on there. So until then I’m gonna be pushing these singles pretty hard so I can get my name out there. Once the album releases, then the real takeover will start to begin..

Oh I’m also touring in January 2020, 5 different cities for the Crossn State Lines Promo Tour. So anyone that’s interested can follow me on any of my social medias and get more info as the time comes.

Nothing but love to my day 1’s!

And major love to my fans that saw me at Screwfest 2019 SA, my first performance when I opened up for Lil Keke, Lil Flip, Big Pokey and E.S.G.