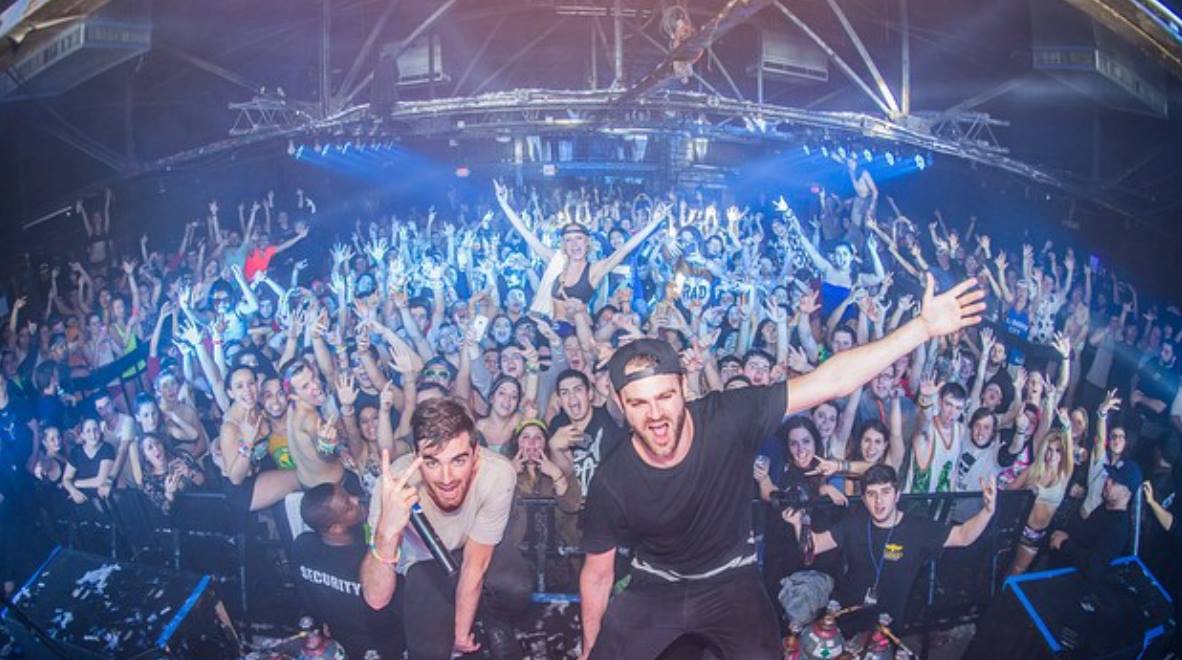 The Chainsmokers, an NYC-based EDM group, took the time to answer a few of HBT’s curious questions. Read what they have to say about North American versus European nightlife, signing assorted body parts, and the conception of their new fashion line. Hit up SoundCloud and give all the Kanye remixes a listen to experience the Chainsmokers, beyond #Selfie.

What’s the first thing you do when you walk into a new hotel room?

Alex: Put on the Discovery Channel—if they don’t have that, I am at a real loss…
Drew: I take my pants off.

What are the most notable differences between touring in North America—your home turf—and travelling through the infamous European party cities?

Hmm… Well, in general, clubs/venues are much newer in America—which is nice—but in Europe dance music didn’t just arrive, it’s been the lifeblood out there. We aren’t saying that the U.S. hasn’t had dance forever, but the scene, and the size of it, is now massive. In Europe, it’s always been bumping. There are artists there that don’t translate well into the U.S., and vice versa. That being said, a good show in Europe is something special; there is a rawness in the energy that is hard to replicate anywhere… Look no further than Tomorrowland as an example of that.

In the studio, do you share the work randomly or do you each excel in complementary areas?

We definitely have our own areas of excellence. Drew came into the group as the brilliant producer, and Alex, myself, as the DJ and brand guy. Knowing each other’s strengths and weaknesses has always been part of our success. We can lend ourselves to the other to make each other even better at what we are already good at. We are constantly pushing one another and that’s what really keeps us moving forward. That being said, Drew is one of the most talented producers I have ever met.

What’s the most recent show you attended, but didn’t perform at?

Out of everywhere you’ve toured, which was the most unforgettable performance?

There are honestly so many! If we had to choose just one, it’d probably be Webster Hall NYC in February of 2014. #Selfie was just blowing up and it was our first headline show in NYC—our hometown. The feels were on a hundred trillion…

What about your success has made you happiest?

We would have to say being successful. But seriously, just the fact that we get to do what we love now and not have everyone doubting us. We get to see the world, be passionate each day—but that isn’t to say we kick back now; we probably put more pressure on ourselves than ever. It’s nice to know we are progressing.

You’ve both undoubtedly had a few memorable encounters with fans. What’s the best thing you’ve ever been asked to sign?

The obvious answer would be tits and ass, but in reality, we signed this wall at the Warfield in San Francisco that literally everyone in the history of music has signed. It was really an honor to throw our names up on it as well!

A bunch of cliché answers is what we have! TONS of music—we’ve just been finishing track after track, and want to start dropping them like Wayne after The Carter. On top of that, our radio show’s alive and well, and we are starting a small clothing line separate from The Chainsmokers. Being from NYC, fashion is a large part of our creativity and while it may not be our strong suit, it’s something that really interests us so we’ve teamed up with some talented folk to help launch OUR THING. Then, we are working on some concepts for a live show, which is really exciting because it’s sort of going to be the funnel that ties everything together. We are still hammering out parts of the concept, but it’s an opportunity to showcase the diversity of the music we’ve been making, and tie in other artists that have covered things we haven’t had the proper chance to do yet.

Continue Reading
You may also like...
Related Topics:featured, The Chainsmokers