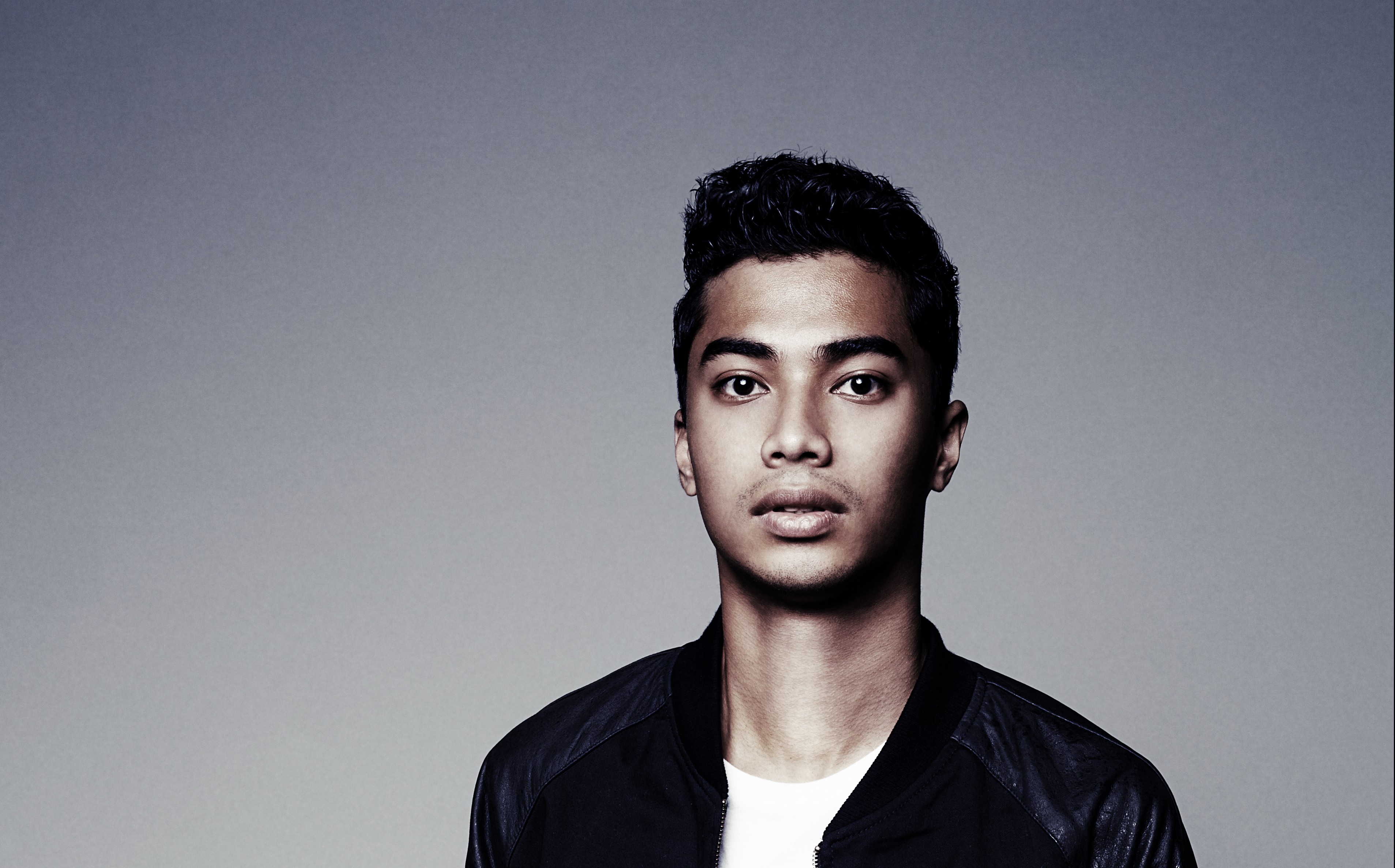 At only 22 years old, Michael Brun’s already a cut above the rest. We could go on and on about his inimitable talent, but you already know all about that. His musical prowess is what drew our attention, but what kept it is all the amazing things he’s doing with his renown. We don’t award praise where it isn’t merited, but we must admit we can’t even fathom what Michael will accomplish in the next decade if this is how far he’s come in a couple of years. Read on to hear about his mission for Kid Coconut, how he left pre-med to pursue music, and more!

HBT sat down with Chocolate Puma a few weeks back, and the topic of grouping sounds by nationality came up. The pair said they totally found this to be true, and went on to explain the distinctions between German sounds, Dutch sounds, and so on. There aren’t too many producers repping Haiti right now, so how would you define the overarching Haitian sound?

You can break it down into the very culturally-linked Haitian music, which isn’t electronic, like rara which is very drum-based and has a lot to do with voodoo ceremonies. Most Haitian music is not electronic, it’s just based on rhythm and percussive instruments. In terms of me and electronic music, when I started making EDM, I wasn’t really influenced by any electronic music in Haiti because there wasn’t that much around in the first place. I was mainly influenced by the electronic music from Europe and the US I was listening to on the radio. I really like progressive music, so progressive house is what got me into it, but I was also trying to incorporate hints of the music that I knew from growing up.

There are other Haitian producers, so would you say they try to do the same thing? Is there any common theme?

I think it varies. For example, there are some Haitian producers that have gone into more roots based stuff, so they’re a lot more geared toward the Haitian sound like rara music. On the other end of the spectrum, there’s also pop music in Haiti and Caribbean music so that influenced some people. Others have gone into more melodic and progressive stuff, like me—I was influenced by a mix of the European and the US styles, but I always try to incorporate the Haitian sounds.

There are countless Dutch DJs, French DJs, American DJs, and so on. Do you think coming from a country that hasn’t gotten as much attention for its dance music bettered or worsened your chances of gaining attention in this industry? Or would you say all things are equal?

I think that in some ways it’s really helpful, because since there aren’t that many other Haitian producers, people are like, “Oh ya, he’s Michael Brun from Haiti.” Some Dutch and Swedish producers I’ve spoken to have told me that it’s such a difficult community to break through for them because there’s so much talent, and it’s kind of like trying to make enough noise so that you can be heard and rise above all the other up and coming talents. So in that sense, it was very helpful for me to come from a country where electronic music wasn’t as big, but on the other hand, the countries I’ve mentioned like Holland, Sweden, the UK, they usually have a pretty tight knit group of artists who have succeeded, so they really help each other out. Haiti doesn’t have that yet, so I’ve been lucky to have always gotten support from other guys around the world. That’s one of the hardest things to overcome, being from a country that doesn’t have electronic music as a part of the culture.

Did you start kicking off your career when you were in Haiti or when you got to the US?

I started making music when I was 15, but I’ve played instruments—piano, guitar, violin, singing—since I was 6, so it’s always been a part of my life. I didn’t really get into it seriously, though. I was more interested in school—I went to a military school in Indiana for my Junior and Senior years, and then I went to college in North Carolina for pre-med. During those four years of high school and getting into college, I really start getting into music more and more. I’d say my professional career started off when I was 20, a Sophomore at Davidson, and I had a release on Revealed with Hardwell. Two months later, I had a release with Dirty South on Phazing.

Many people are pretty ignorant about global issues and international development. From what we’ve read and heard, you’d be counted among those who know what’s up in the world due to the surroundings you grew up in. Do you think you can change that for your fans, or are you happy with just exposing them to the sounds of your culture?

The main goal with Kid Coconut was to try and do as much community building as possible. It’s not only a label to release music for undiscovered talent—I really wanted to use it to develop stuff in Haiti as well. For example, in December I had a workshop with this organization called APJ (Artists for Peace and Justice), and they had a media institute in Haiti. I went to the music school and did a seminar with the students, and basically we went over all their final projects for the semester and I did a live remix in class. We went through some stuff they were working on, and I gave them all the pointers and feedback that I could. I did that with two classes: one set was Sophomores and Juniors, and the other set was Freshman. That stuff’s really important to me—not only education in general, but specifically things that are going to benefit the culture of the country. I was so lucky growing up; even though I was growing up in Haiti, I always had food on the table, a house, and I didn’t need to worry about where I was going to school—I was fine. For that, I’m so grateful. My family always taught me that if you receive something, you can’t just keep that gift—you need to pass it on in any way you can. The fact that I was able to do music as a career is amazing, and I really want to foster that in up and coming artists and create a creative class that’s really going to benefit Haiti in the long run. That’s the kind of stuff I’m doing on my own now for Kid Coconut, but I really want to grow it and try to get as much outreach as possible. I was supposed to be a paediatrician before all this music stuff happened, so I spent 3 months at a paediatric hospital in Haiti, and basically from being there and working with these organizations I just really wanted to do something in the country. The two things that have always attracted me and that I’ve always cared so much about were health care and education. The more and more I’ve gotten into the music industry, the more and more I’ve realized that education is so key for everything. Music is awesome and it reaches so many people, so I’m using that as a way to do more community building.

How did you weigh the pros and cons of leaving school for your music career? Were they equally important paths for you?

It was interesting because I went to a really small college called Davidson in North Carolina, and there were only like 1500 students. The fact that I was there was really helpful, not only because it’s a great school, but also the professors and the faculty are very close to the students, so I was able to keep my advisor and the dean updated on everything that was going on as it was happening. When I started getting these offers to do releases on some labels, started getting some management offers and agency offers, I was talking to my parents, friends, and the school about it, and the school was just like, “This never happens; this is a crazy opportunity. You have to take it. We’re not giving you an option.” I was on like a 90% scholarship, so they offered to hold the scholarship for me and let me give it a shot. If it didn’t work out, I would be able to go back.

Do you think you’d want to go back?

At some point! I’m in music now, and I’ve gotten to do so much already, and there’s so much more that I’m going to be able to accomplish. I’m 100% focused on this right now, but I’d love to go back to school at some point just for myself.

On a less serious note, what do you have planned for WMC?

I’m doing Ultra which is awesome, it’s the second year I’m playing there so I’m really excited for that. Then I also have a bunch of pool parties and after parties—the schedule should be up later this week!

There are quite a few cities that are considered dance music hubs throughout North America and Europe, so what made you decide to settle in Miami?

Miami was always just the closest place that I knew in the US. I used to come here every year, about twice a year, because I have family here and it’s also really close to Haiti. It was kind of a no-brainer, and the fact that my manager lives here, too… It just made sense to move here. Close to family, good weather, and with the team as well.

You’ve expressed your desire for your label, Kid Coconut, to serve as a platform to develop artists who would otherwise go undiscovered. Who’s on your radar right now as someone our readers should check out?

There’s a someone we’re actually working on something with right now for the label, his name’s Eden Prince. I’m very, very excited for that. I’ll hopefully be playing some of his stuff at Ultra.

A lot of music! The most music I’ve ever had, by far. I’ve just been in the studio every day, like 10 hours a day, for the past 4 months. I worked on Matthew Koma’s album that’ll be coming up soon, and that was really fun because it was kind of out of the box for me to work on pop music with him, so I’m very excited for that. I’ve also done some stuff with some new singers that I’ll be able to talk about soon. My next release is a new one called See You Soon, and there will be more information on that in the near future. That’s one of the most emotional tracks I’ve ever done. There’s also another club one coming out that I’m just finishing right now, and we’ll hopefully be debuting that at Ultra. There’s literally like 15 tracks.

Link Up With Michael Brun: